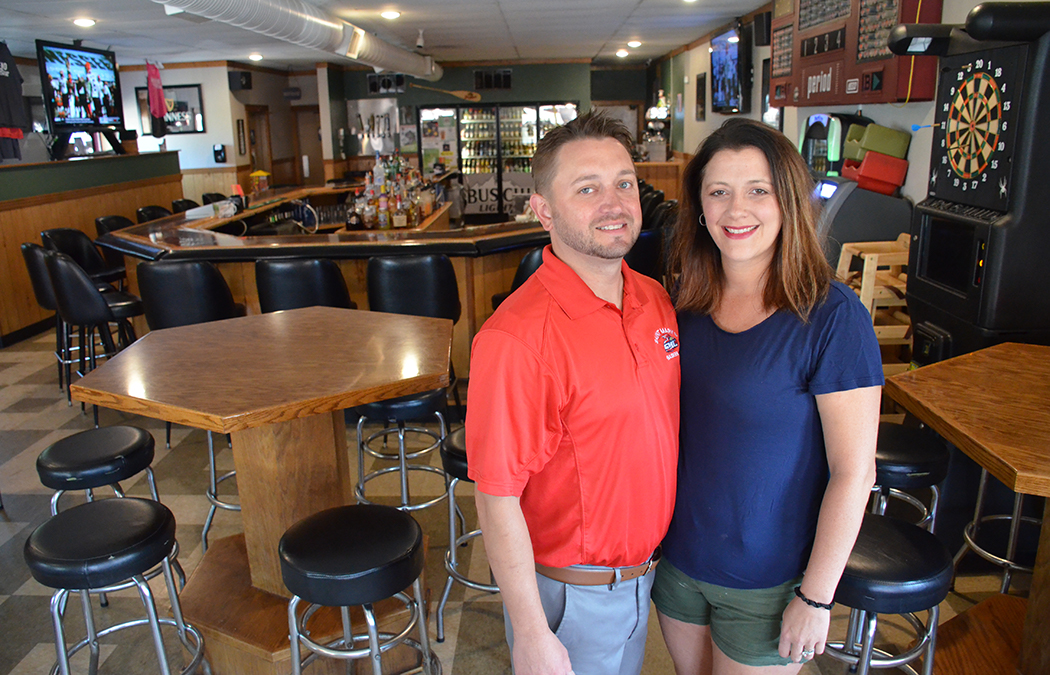 Nick ’07 and Marie (Fay) ’05 Kuhn have built their business around building community.

They know that so often friendships are celebrated and strengthened by breaking bread together. This is especially true considering the number of breadsticks they’ve served to the Saint Mary’s baseball team.

The Kuhns say they are both huge sports fans and are maybe a bit biased for the Cardinals, as Nick played outfield and catcher on the team alongside current coach Nick Winecke ’07.

They’re also big fans of Saint Mary’s. Marie studied public relations, while Nick majored in management and entrepreneurship. They met at Saint Mary’s and even got married on campus.

And now, after following their dreams and opening NorthEnd Pub & Grill in Cochrane, Wis., they are finding ways to give back to the place that brought them together.

For starters, they’ve sponsored a locker in the new baseball clubhouse and catered several meals for the team, particularly during breaks when the team is still on campus. They served the team a meal, in kind, this past year as a congratulations and in preparation before their NCAA tournament.

“They are always there to help,” Winecke said. “They’re just great people. They’ve worked really hard to run their business and have great clientele. They love to give back, and they’re everything that’s good about Saint Mary’s.”

Winecke is not only a fan of the Kuhns, he’s also a fan of their food, including burgers, pizzas, paninis, or wings. He says the couple has fed the baseball team a taco bar, pastas, grilled chicken, and ribs — food that spoils them for regular cafeteria food.

And, Winecke adds, he isn’t always the best at giving them advance notice in feeding his team of more than 50. “About a day and a half at the most,” Nick Kuhn responds with a laugh.

The Kuhns say it’s amazing to watch their food be consumed so quickly and with such appreciation. At one point, Marie Kuhn remembers going through an entire case of 300 breadsticks.

Why do they give back? Marie Kuhn answers simply, “We really just love it. We love being able to do those things. We love to be helpful to Coach Winecke whenever we can do something for him because he’s such a good friend. That program was really important to where we are today. Every stepping stone is important. We both love baseball, too.”

“The baseball team, they treat you like you’re one of them, even 15-20 years later,” Nick Kuhn adds. “They bring our son, Connor, who is 7, out on the field and play catch with him. They treat him like their little brother. He’s been going to games since he was born.”

When Nick Kuhn thinks back on his time on the baseball team, he thinks of memories from the locker room, practices, and long trips — of friendships you never forget. Some teammates have worked at the restaurant part time. “Being from Chicago, I didn’t know anyone when I got there,” he said. “I never left. Nick (Winecke) hired me as an assistant one year and I was a junior varsity coach one year. I stayed in the area until I migrated here.”

The two have also come back to speak with Saint Mary’s entrepreneurship students about tips for starting their own businesses.

“It can be done,” Nick Kuhn said. “We built this from the ground level up. You need to work hard, but it’s rewarding to be able to tell them that it can be done.”

When they started the restaurant, Marie Kuhn said they started with a blank canvas. They knew they wanted to have a sports bar, but they invited the community to help mold the business into what they needed it to be. “They have welcomed us wholeheartedly,” she said. “It’s really great to be part of a small town and give back with things like T-ball Chicken Qs. People really appreciate you. And it’s rewarding when people choose to spend their time with us.”

Nick Kuhn adds, “It’s full circle; we cater everything from baptisms to funerals.”

The two especially love when recognizable Saint Mary’s faculty, staff, or alumni drop by. And they do their best to promote the university whenever they can.

“At Saint Mary’s, I primarily remember the community feel,” Marie Kuhn said. “I remember feeling people really cared about you. On a small campus, you knew everybody. I just loved my experience. We’re really proud that we are alumni.

“Every time we see an alum or someone from school in the pub, we do feel special,” she added. “When I see a Saint Mary’s T-shirt, I love to ask. There’s always a connection. It’s a family, and people love to share.”