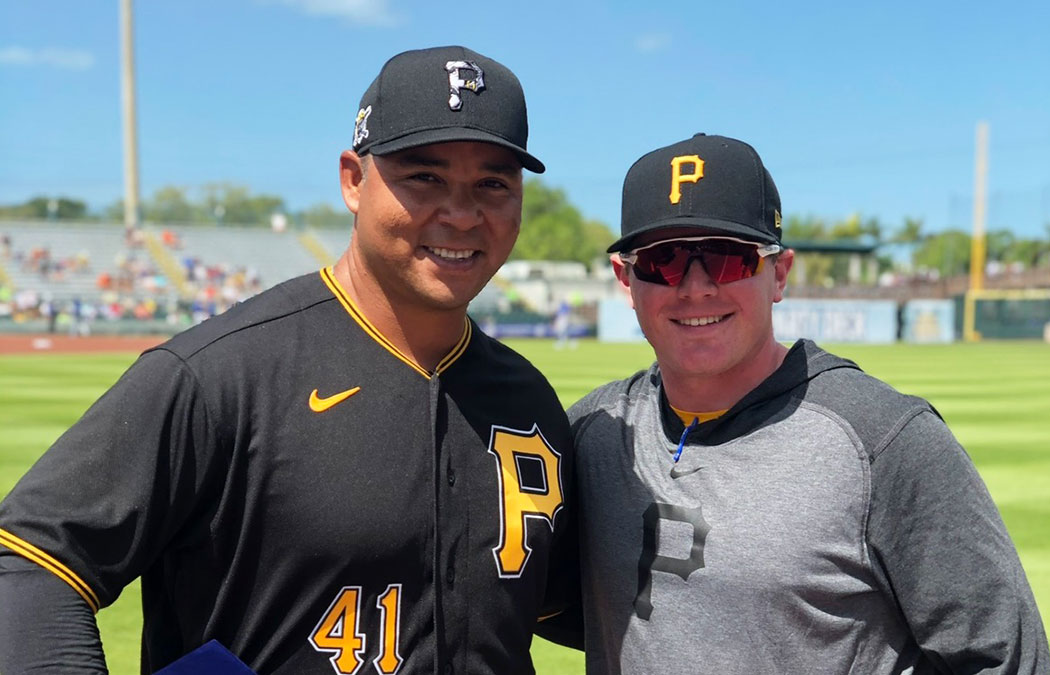 Jake Mencacci ’18 grew up with either a baseball glove or a hockey stick in his hand.

When he came to Saint Mary’s University of Minnesota, he served as catcher on the Cardinal baseball team while studying business management and marketing — all while dreaming of a career in sports, preferably baseball or hockey.

That dream job? “I’m pretty much doing it now,” the assistant for coaching and player development for the Pittsburgh Pirates said. He owes his success to a love of baseball, persistence, leadership skills, and maybe a little luck. Those who know him say it’s also because of his dedication and hard work.

Mencacci was hired by the Pittsburgh Pirates in December of his senior year and has steadily worked his way up the organization.

“I didn’t really think I had a chance to work in baseball, so I just started to apply for regular jobs,” he said. “I saw the Pirates logo pop up and thought, ‘Why not?’ ” Mencacci said the application was arduously long, and it nearly deterred him right at the tip off, but he persevered.

“About a week or so later, I was studying for finals late at night and I got a phone call from a Florida number,” he said. Thinking it was a telemarketer, Mencacci almost didn’t answer. Luckily, he did. Once he found out it was the Pirates, he said, “I started freaking out a little bit, put the phone on mute, and started screaming to my roommate.” 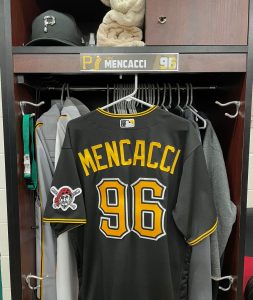 After an interview and a followup call, a third call came while in a car with his parents on the way to New Mexico for Christmas. “We were in Amarillo, Texas, in the middle of nowhere, and I was scared I’d drop the call the whole time,” he said. But, luck was again on his side, and this phone call brought a job offer as a minor league operations assistant with the West Virginia Black Bears, then a short season affiliate of the Pittsburgh Pirates.

He began working with the team in a variety of capacities. On the field, he worked with pitchers and position players to assist in player development using technology and analytics. He was even given the opportunity to bullpen catch and coach first base as needed. Off the field, he coordinated team travel, player transactions, advanced scouting reports, and served as the conduit between other teams and front offices.

In 2019, he was moved to the Greensboro Grasshoppers, a Minor League Baseball team based in North Carolina that is a member of the High-A East and the High-A affiliate of the Pittsburgh Pirates. There, he added video work to his other duties.

In 2020, he was stationed at the Pirates alternate training site in Altoona, Penn., where players on the cusp of the big leagues were training to stay ready to fill in for the major league team. Mencacci once again suited up, serving as a bullpen catcher and even catching during simulated games, in addition to his baseball operations duties.

Next, Mencacci was promoted to fellow, player development, which he called a hybrid role of on field and off field duties. Based in Florida, his duties include assisting coaches and coordinators with the implementation of technology and analytics, overseeing minor league operations assistants, and learning more about the administrative side of the game, which included more exposure to contract work, roster decisions, expense approvals, and miscellaneous items. Recently promoted yet again, Mencacci is now the assistant for coaching and player development for the Pirates, a similar hybrid role, with added benefits and responsibility.

Each day brings new challenges. Mencacci is in charge of the alternate training site in Pittsburgh to start the 2021 major league season including all travel, protocols, and assisting the players both on and off the field. “I just like that every day is different. I like the fact that we’re working toward a growth stage. We are investing in our development and our younger players. I like being around them and putting on my baseball pants and going out and working with them on the field but also helping them off the field. I get a lot of freedom to do what I think is right.”

Mencacci said being on the Cardinal baseball team was beneficial to his success. “Coaches Nick Winecke and TJ Oakes were a big part of my personal and professional development,” he said. “What also helped me the most was serving as the Student Athlete Advisory Committee president my senior year and being part of the Saint Peter and Teresa Leadership Clubs. Being part of those allowed me to work with people in the real world and deal with real-world problems before I got into the real world. A lot of people miss that in college.”

The Business Department, he said, also put him into real-world situations, which prepared him for much of the work he is doing today. “Strategic Management was the most beneficial because you have to think on your toes, and you don’t always have the answers,” he said. 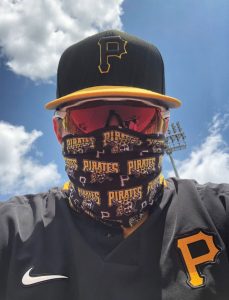 Mencacci advises students looking to get into sport management to challenge themselves as much as possible and to learn by doing. “An education is important but it’s also really important to challenge yourself outside of the classroom, whether on a sports team or in a club,” he said. “Venture outside of the classroom and see what you’re capable of in a leadership setting. The more generalist skills you have, the more valuable you’ll become. In this COVID world, a lot of places are short staffed; it’s about how flexible you can be in a given setting.”

Mencacci furthers that graduates should be prepared to start at the bottom. “You have to start somewhere and if you do the little tasks, those turn into bigger tasks, and if you build trust, you’ll sky rocket,” Mencacci said. “I want to thank the Pirates for treating me so well. They have given me an abundance of opportunity, and they’ve taken care of me personally and professionally. I’m very fortunate to be where I am, and I’m appreciative of the opportunity I was given.”

“We knew from the first day Jake visited campus how special of a person he is,” Winecke said. “Jake’s work ethic and willingness to do all the little things that most don’t want to do is what separates himself from so many other people. He is always willing to do any job he is called to do, and no job is below him. He represents all that is good about our baseball program and Saint Mary’s University.”

Photo caption: Mencacci, poses with Miguel Perez, a friend and mentor who served as his manager in Greensboro. The photo is taken when Perez won the Chuck Tanner Award in 2020 for the most outstanding coach who exemplifies all the characteristics Chuck Tanner did.