A quick study: Learning Design and Technology graduate earns statewide recognition for work inside and outside classroom 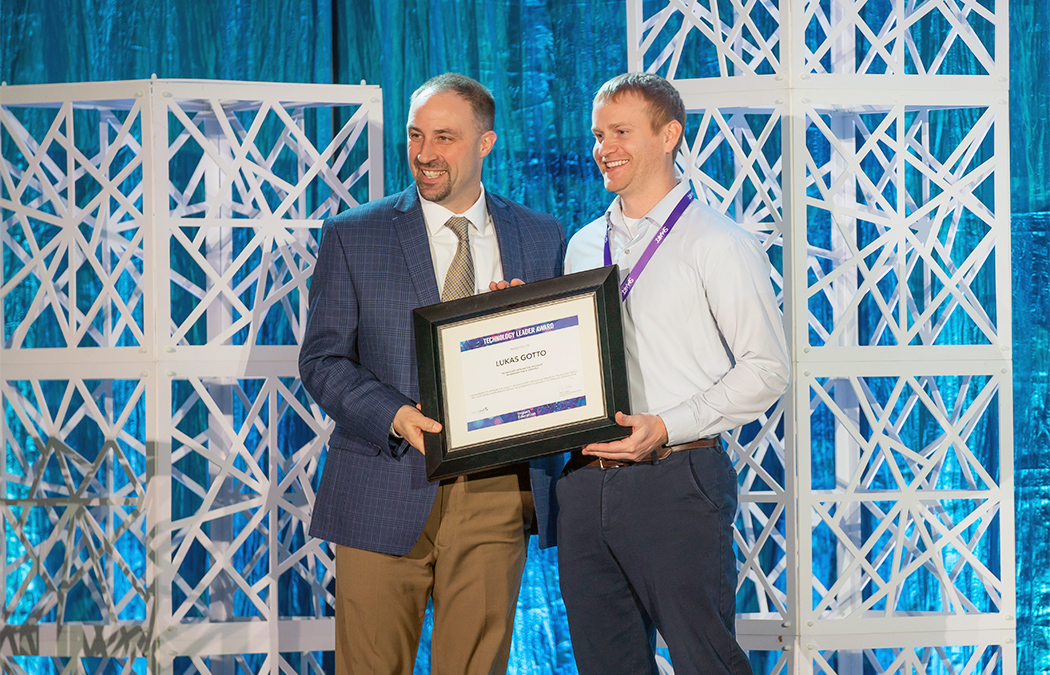 When it comes to his work for Alexandria Public Schools, Lukas Gotto M’17 has a phrase that sums up his teaching philosophy: Cool is exciting. Exciting is engaging. Engaging leads to learning.

“That slipped out of my mouth one day when I was explaining it to somebody, and I’m like, ‘Oh, that sounded better than I intended,’” added Gotto, with his typical self-deprecating humor. 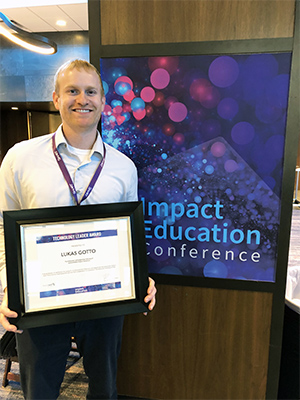 Lukas Gotto M’17 stands with the 2019 Technology Leader of the Year award at the Impact Education Conference in December in Minneapolis. Above, Gotto stands with Chad Coauette, executive director/CEO of Sourcewell Technology, after being presented with the award.

In December, Gotto was named the 2019 Technology Leader of the Year (watch a video made for the award ceremony) at the statewide Impact Education Conference, sponsored by Sourcewell Technology, two years after he earned his M.Ed. in Learning Design and Technology (LDT) from Saint Mary’s University of Minnesota and became Alexandria Public Schools’ first instructional design technologist.

What was one of his immediate thoughts when he heard the news?

“What? Really? Who messed up?,” Gotto said with a laugh. “I was just shocked and very humbled and honored.”

What cannot be downplayed, though, is the impact on the school district’s students, faculty, and staff both within the classroom space and outside of it.

“His disposition, zeal, and accomplishments are illustrations of one of the goals of the LDT program, which is to help students develop skills, mindsets, and capacities so they can be change agents in their schools, organizations, and communities,” said Nancy Van Erp, Ph.D., the LDT program director.

Gotto first arrived in Alexandria in 2014 as an eighth-grade social studies teacher, a position he served for three years. In 2016, Gotto decided he wanted to pursue a master’s degree but had to find one that was completely online given his coaching commitments with football, baseball, and boys’ and girls’ basketball teams. He came across information about the LDT program, which piqued his interest, given that it merged his passion for social studies with educational technology.

Looking back at his time in the program, Gotto was impressed with the attention that was being paid to design thinking. Although the concept is now found in educational settings everywhere, that was not the case when Van Erp first presented it to Gotto and his classmates, he said. 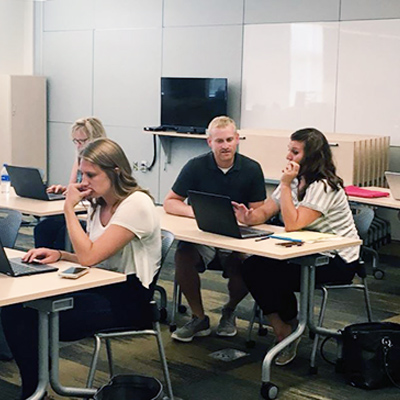 Lukas Gotto M’17 works with staff members of Alexandria Public Schools during a professional development session. Gotto has created a “Technology Champions” program within the district in which he teaches faculty and staff members throughout the school year about the latest technology so they can, in turn, introduce it to their students.

“It was fun because I was sending articles and books to our assistant superintendent and people several years ago before they were talking about it and now it’s such a big thing,” Gotto said.

As he was finishing up his degree at Saint Mary’s, talk surfaced of creating an instructional technologist within the school district, based out of Discovery Middle School. Eventually he was offered the position, a decision that was tough given his love of teaching in a traditional classroom setting.

“I do miss it, but there’s something about this job that’s always new and different,” Gotto said. “I really enjoy that aspect of it.”

For his capstone project, Gotto created a professional development model for what would become known as “Technology Champions.” Given that he is the only person of his position within the entire district, that model would turn into a program in which faculty spend four half-days being taught by Gotto about the latest educational technology devices using a motto he picked up in the LDT program: I do. We do. You do.

He uses the same practice when working with students by getting in front of the class for the first class period, then standing next to the teachers as they provide instruction.

“So that way, if they have questions, I’m still right there,” Gotto explained. “And then by the last hour of the day, I’m typically out of the classroom. They’ve done it by themselves.”

With the assistance of the local Alexandria Education Foundation, Gotto has been able to secure more than $10,000 in grants to introduce students to a variety of educational-based technology including drones, augmented reality headsets, and little robotic balls known as Spheros, which students work with through mathematical, scientific, and coding platforms to program their movement (read an article that Gotto wrote about them for EdTechTeam).

The importance of unplugging 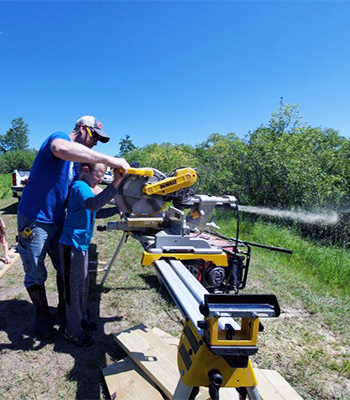 Lukas Gotto M’17 works with second grader Archer Swaggert with a large saw during the recent construction of a bridge/boardwalk behind Discovery Middle School in Alexandria this past summer.

Gotto grew up as the oldest of three brothers in Windom, Minn., a 90-minute drive east of Sioux Falls, S.D. Interestingly enough, his parents would set hard limits on video games or other types of technology for their children, which often involved competitions of “Guitar Hero” on PlayStation 2.

“We grew up on an acreage with horses, so there was always something that needed to be done outside,” Gotto said. “That was their mindset, ‘You don’t need that. You can just go outside.’”

As a result, Gotto held a fascination for technology, while maintaining a love to be outside and work with his hands.

Gotto’s love for the outdoors led to an idea to build a bridge/boardwalk structure that would extend a trail beyond some marshy lands in the back of the middle school. He had worked on previous projects for other school districts during the summers, so it was only fitting that he would help construct one for his own school, which sits on more than 100 acres of land.

Gotto met with members of the community who agreed to donate either time, money, expertise, or equipment to make the project a reality this past summer. In total, six different businesses stepped forward, including a bridge company that donated four 30-foot steel beams. 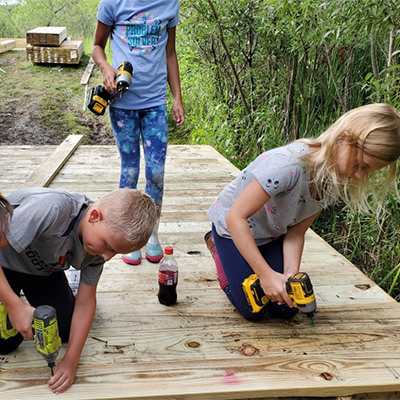 Fourth grader Nate Fuglestad, left, and third grader Avery Olson help construct part of the bridge/boardwalk behind Discovery Middle School. They were just two of the students Lukas Gotto M’17 enlisted to help with the project.

“We installed those without the kids because that’s some heavy metal going around, but then they did the rest of it,” Gotto said of the numerous students who worked side-by-side with their teacher’s assistance.

“The kids absolutely rocked it,” Gotto said. “It was fun to see them use a saw or a screw gun for the first time.”

Given how busy his life is — he and his wife, Alicia, have a one-year-old daughter — Gotto appreciated how seamlessly his degree from Saint Mary’s fit into this life. He has encouraged fellow educators who are thinking about pursuing a master’s degree to look into the program.