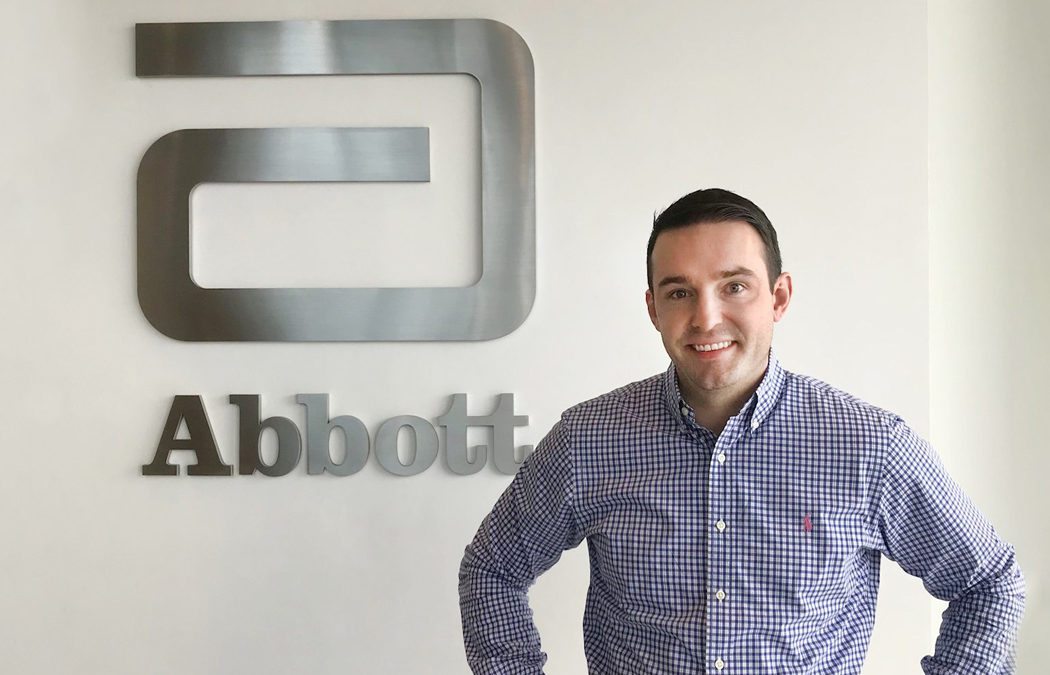 Kevin Black ’08 is a lifelong athlete and says he operates best on a team.

A former Cardinal baseball player at Saint Mary’s University, Black is now a finance manager at Abbott Laboratories, formerly known as St. Jude Medical, where he leads a team that forecasts the company’s sales.

Abbott manufactures products like pacemakers, heart valves, stents, and other medical devices. Black has worked in corporate finance for about six years; but he is especially proud to work for a business that helps people. “At the end of the day, I work for a company that makes life-saving products,” he said. “And that’s pretty special.”

An accounting major and economics minor, Black spent three years working for Deloitte, a Big Four accounting firm, before moving to his current company. He always knew he was going to major in something related to business or finance.

“I’m super passionate about economics,” Black said. “I love the macro and micro economics of the world. I knew that in order to use that someday in the business world, I’d probably have to add an accounting side to it.”

Black said Saint Mary’s helped prepare him “without question” for what he’s doing now. He said his accounting classes were demanding, but helped prepare him for life in the real world. “In fact, when I interviewed at Deloitte, they asked how I did in Intermediate Accounting I and II,” he said. “I didn’t realize those courses were going to set the tone for whether or not I was going to get this job in the future.”

Black also remembers his Strategic Management course (also known as Strategies) and how stressful but rewarding the final presentation was. “The stress and anxiety that goes into preparing and making sure you’re well-versed on the topic at hand — that doesn’t change when you move to the business world,” he said. “Saint Mary’s does a nice job of exposing students to what the environment is going to be like once they get into the real world.”

He and his wife Katie welcomed their first child, a baby boy named Luke, just two months ago. Someday Luke may add to the family legacy the Blacks have established at Saint Mary’s.

Kevin’s dad Jeffrey Black ’77 and brother Stephen Black ’06 are also Saint Mary’s alumni. “My dad has a really close group of friends from Saint Mary’s that he still keeps in touch with. They actually meet every Sunday to watch the Vikings play, which they’ve been doing for years,” Black said. “I grew up watching the Vikings and listening to these guys talk about their stories from Saint Mary’s.”

Black said he also formed strong relationships while attending Saint Mary’s. “Starting on the baseball team as a freshman, I had about 30 friends right away,” he said. “A lot of those guys I met that first day of practice are the guys who I still stay in contact with right now. I didn’t realize it would be that impactful.”

Black returns to Winona every year for the golf tournament in September and one or two other times a year to catch a game or meet up with friends. He’s also been generous in giving back to the baseball team and Saint Mary’s.

“I feel it’s important to give back to the institutions that made an impact on your life, and I think Saint Mary’s undoubtedly made a positive impact on my life,” Black said.