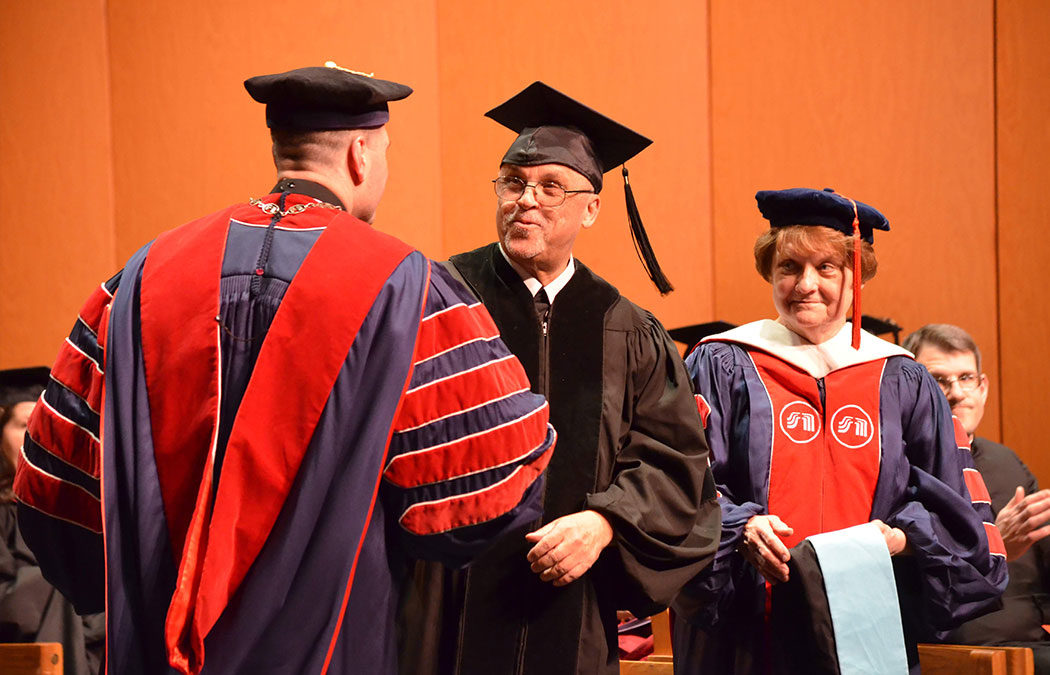 WINONA, Minn. — In celebration of its heritage, Saint Mary’s University presented awards to the leader of the De La Salle Christian Brothers, as well as one faculty member, one staff member, and two outstanding seniors at its annual Founders’ Day celebration March 12 on the Winona Campus.

Brother Robert Schieler, FSC, Superior General of the De La Salle Christian Brothers received an honorary doctorate of educational leadership. In his position, Brother Robert leads the largest order of religious Brothers in the Church dedicated to education. The honorary doctorate recognizes Brother Robert’s dedication to the Lasallian charism, especially his service to the poor and his commitment to education. Prior to being named Superior General in 2014, Brother Robert served as General Councilor for the Lasallian Region of North America (RELAN). He also served as a trustee for Saint Mary’s University from 2011-2014. Brother Robert has said his mission is to “inspire the Brothers and all members of the worldwide Lasallian family to create and sustain communities of human and Christian education, especially for vulnerable young people who live on the margins of contemporary society.”

Dr. Tricia Klosky, Criminal Justice coordinator and department chair and associate professor in Social Science, received the Brother Charles H. Severin, FSC, Award. Given by the university every other year, this award is bestowed on a faculty member who demonstrates sustained excellence in teaching, contributes to the university outside of the classroom, builds community by serving as a model of the Lasallian spirit, and is a creative, passionate, and inspiring teacher. Dr. Klosky, who has taught at Saint Mary’s for 17 years, has successfully grown the Criminal Justice major and demonstrates her commitment to students both inside and outside of the classroom.

Alisa Macksey, executive director of the First Generation Initiative, received the Distinguished Lasallian Educator Award. Presented each year, the award recognizes a member of the faculty, staff, or administration whose life of faith and service exemplifies the ideals of Saint John Baptist de La Salle. The award is given by Lasallian institutions like Saint Mary’s in the Lasallian Region of North America of the De La Salle Christian Brothers to honor contributions and commitment to the Lasallian mission of education. Macksey has worked in various roles within the Lasallian network since 2000 and has led the First Generation Initiative at Saint Mary’s since 2015. She also has been instrumental in developing the AXIS: Journal of Lasallian Higher Education and the International Symposium on Lasallian Research.

Max Champa and Bailey O’Hare were named this year’s Outstanding Male and Female Seniors. Outstanding Seniors have demonstrated the ideals of scholarship, character, leadership, service to colleagues and the university community, as well as genuine concern for the needs of others. Champa, son of Bill and Marykaye Champa of Bloomington, Minn., is a business intelligence and analytics major. O’Hare, daughter of Tim and Brenda O’Hare of Rushford, Minn., is a biology major. Other Outstanding Senior nominees included: males: Aldontae Guess, Zechariah Kitzhaber, Bailey Melz, and Nathan Young; females: Tatiana Jones, Marissa Kinzer, Erin McCoy, and Laura Sonday.

See more photos from the day at smumn.edu/founders2019.