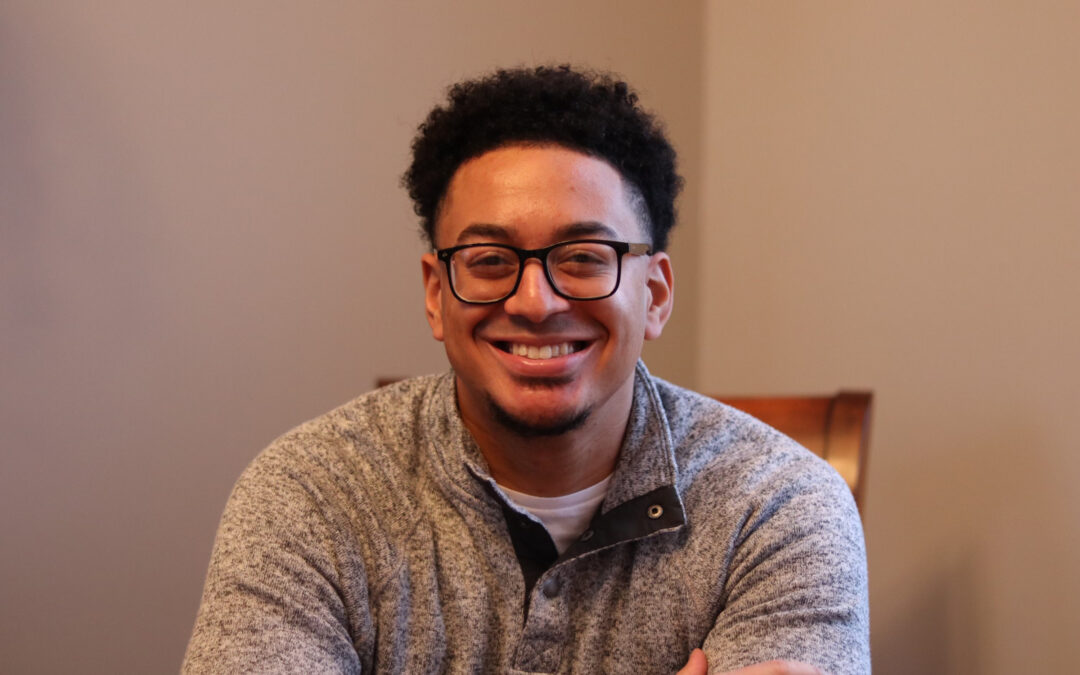 The home office from which Bradley Hill B’19 works for U.S. Bank in Minneapolis has a simple setup. He has two monitors on his desk and a family photo over his shoulder, an image that he says motivates him to work hard. When he logs in each morning, Hill works with coworkers to automate their processes and says he loves making people’s lives easier — simplifying them, if you will, like his office setup.

“Being able to relieve them from doing manual tests, and hearing the joy in their voices when you can help them get rid of something that they do over and over and that is tiring, that’s the reason why I go to work every day,” says Hill, who is a product manager for robotics process automation in U.S. Bank’s Global Treasury Department.

“I’ve been through that process — open an Excel file, copy the numbers, and paste it in — and I hated it,” Hill says. “I enjoy learning about all the different processes in our stakeholder groups and understanding their joy and excitement [when we help them automate it].”

Hill coordinates the relationships between coworkers and the back-end developers who create the new automated processes. He landed at U.S. Bank after a successful business analyst internship at the company during his junior year at Saint Mary’s, where he studied business intelligence and data analytics and had a minor in math.

The internship was part of the Eddie Phillips Scholar Program for African-American Men, which provides scholarships, mentoring, and leadership opportunities for juniors and seniors in college. Created by the Minnesota Private College Fund and supported by The Jay and Rose Phillips Family Foundation of Minnesota, the program offers internships, like Hill’s at U.S. Bank, as well as a national conference.

“Being able to bond with other African-American men my age — not only Saint Mary’s students but also outside of Saint Mary’s — being able to hang with them and keep in contact with them was a great experience,” Hill says. “We went to Baylor for a conference, and that was a great experience to be around a lot of African-Americans, people who relate to you, and learn about our history and what’s going on in the world.”

Hill says the Phillips Scholar Program got him where he is today, and he might not have considered staying in Minneapolis without the internship and subsequent job opportunity. He grew up in the south suburbs of Chicago with his parents and brother (the family pictured in that office photo) and always envisioned he’d return home.

But he’s enjoying life in Minneapolis, where he plays in two men’s basketball leagues with teammates from his four years on the Saint Mary’s basketball team. And he continues to embrace leadership opportunities, having recently participated in the McKinsey Academy Black Management Accelerator Program at U.S. Bank.

Hill also coaches seventh graders on a youth travel basketball team, the Minneapolis Lakers. Some of his players have started thinking about their future on high school or college teams, and have asked Hill about his experience playing in college. “A lot of them ask me, ‘What can I do to get better?’” Hill says. “So it makes me feel joyful, that they’re wanting to learn, and being able to share those memories and moments with them and seeing them grow, getting those a-ha moments in practices.”

When Hill thinks back on his time at Saint Mary’s, on and off the court, he says it taught him to be a good teammate. “I’ve learned through basketball and Saint Mary’s, being able to help people out when needed, or just being a good listener and creating those connections to have after college, that’s what I’ve carried over.”