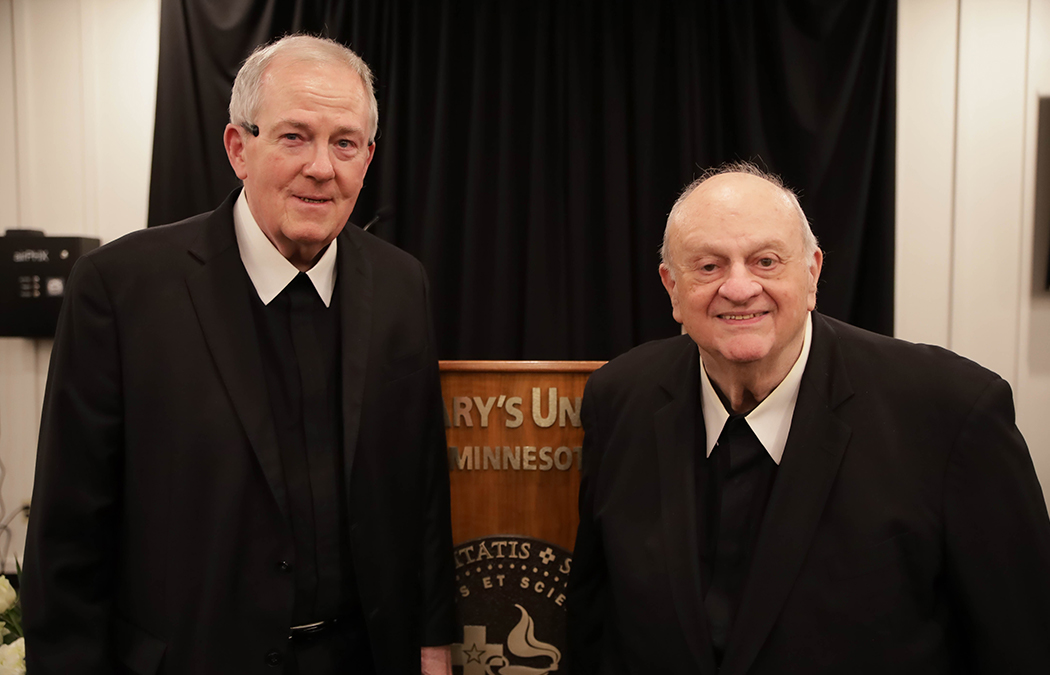 The Heritage Award, given annually at the university’s Benefactor Recognition Dinner, held this year on Oct.14, recognizes special individuals whose exceptional philanthropy has significantly transformed the university and positioned Saint Mary’s for the second century of excellence in education.

Brother Louis served as president of Saint Mary’s from 1984 to 2005 and chancellor from 2006-2011. Brother Louis DeThomas guided Saint Mary’s through an exciting period of change and growth in enrollment and programming. The college became a university, with successful new graduate and special programs at the Twin Cities and Winona campuses and Rochester Center, as well as classes in Apple Valley and more than 50 off-campus sites throughout Minnesota and Wisconsin. Brother Louis has continued to be a dedicated philanthropic supporter of the university.

Brother William served as president of Saint Mary’s from 2008 to 2018. During his tenure as president, Brother William oversaw a decade of significant building projects and acquisitions including the Science and Learning Center (now Aquinas Hall), a baseball clubhouse, and Brother William Hall in Winona; Cascade Meadow in Rochester and its subsequent expansion into what is now the Rochester Campus; and the mansion and Saint Mary’s Event Center in the Twin Cities. Under his leadership and vision, the university also saw significant growth in its online programs, initiated a collaboration with Mayo Clinic for a Physician Assistant program, and founded the First Generation Initiative.

The Saint Mary’s community is grateful to be able to recognize these two individuals who are responsible for the growth of the university and have been committed to the institution’s mission and vision.