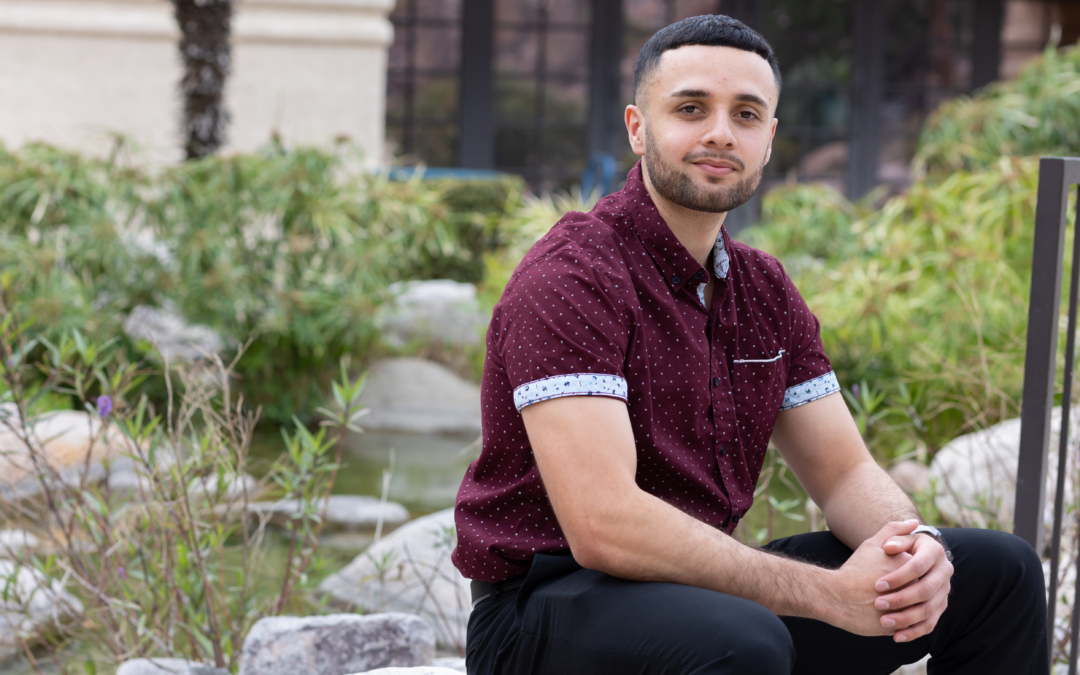 From his new office at Goldman Sachs in Tucson, Ariz., Javier Madrid B’18 describes his shoot-for-the-moon philosophy. He believes in aiming high. His philosophy is that if you fall short of your goal, you’ll still end up in a good place.

Madrid grew up in Naco, Ariz., and had just moved to Tucson, Ariz., at the age of 13 when he had the opportunity to participate in Saint Mary’s inaugural Countdown to College (C2C) four-year summer program through San Miguel High School (Cristo Rey Network).

He credits C2C, the broader FGI program, and the program’s first administrators, Jane Anderson and Edith Galvez, with changing his life.

“First off, from where I’m from, statistics are very grim as to how many people go to college and graduate,” he said.

He’s also grateful for the lifelong lessons he learned from his peers in the program. “I grew up in a predominantly Hispanic neighborhood and went to a high school that was mostly Hispanic, so C2C exposed me to different cultures,” he said. “It’s where I began to expand my horizons, and it helped me put myself into other people’s shoes. Some of my best friends are from Chicago and had their own sets of challenges. It gave me the gift of perspective, which is so important, especially in the professional world. And in society, particularly in this political spectrum, we all need to take a second to listen. There’s an opportunity to build bridges and build one another up. We work better in teams.”

It’s this team atmosphere that, Madrid said, supported him for eight years through the C2C and FGI programs.

“The C2C program helped prepare me for high school because I technically went to college before I went to high school,” he said. “It showed me the importance of time management, and prioritization. And when I got to college, it was nothing new. Aside from all the academic courses, in grammar, math, and science, the C2C program showed us what a college environment is like. In my last year of C2C, we conducted a science project on clean water and the variables that affect its accessibility. This is the type of activity that catapults you into the college atmosphere because you’re presenting to tenured professors with Ph.D.s.”

Being chosen as an FGI Scholar and being able to attend Saint Mary’s on a full scholarship, Madrid said, meant the world to him. “It was emotional,” he said. “When I reflect on all the sacrifices my parents made, working late nights and extra jobs, how they sent my sister Yvonne and I to Tucson for the opportunity at a better life, I acknowledge all the sacrifices my family made for me and how they led to additional opportunities.

Madrid is thankful to Jack and Mary Ann (Wera) Remick CST’64 for generously supporting the program from the beginning.

“They’re amazing individuals,” he said. “By the time I graduated, I understood a lot more about the commitment people made to me and my peers and the money and time they invested in us to push us and provide us with the resources to be successful. With every passing day, you appreciate that more and more.”

And, he’s grateful to the De La Salle Christian Brothers. “I can never repay the Brothers for what they’ve done for me and my family. I’ve been able to see and grow so much. I was chosen to travel to Washington, D.C., when Pope Francis visited and was also selected to go to Rome as a Lasallian Leader. The Brothers bring so much to the school’s culture.”

It has always been important to Madrid that he not let anyone who has believed in him down, and that hard work ethic has extended to his career.

After moving back to Arizona to be closer to his family, Madrid began working in management in the paint industry before switching to commercial insurance. About a year ago, he had an opportunity to join Goldman Sachs & Co. as an analyst.

He now works in wealth management, helping clients reach their investment goals through financial planning and investment management. “It’s one of the top financial firms in the world, and working here has been a life-changing experience,” he said.

Another life-changing experience was the birth of his daughter Kamila in fall 2021.

“I feel like it’s a dream come true,” he said. “I have a long way to go but feel like I made it and if I wouldn’t have dreamed it and aimed high, I wouldn’t be where I’m at today.

“Saint Mary’s obviously gave us a quality education but one of the most important things is the type of people they graduate. We’re adaptable and excited about learning. It produces young, productive, passionate, and caring young men and women.”