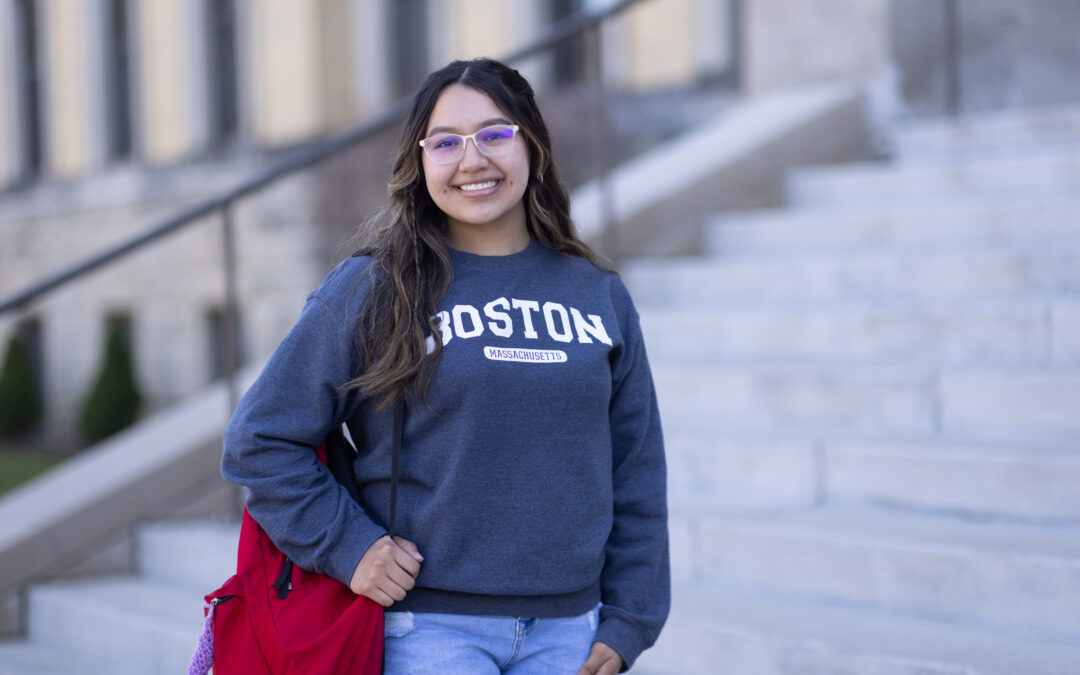 Family is everything to Jacqueline (Jacky) Beltran ’24.

After losing her father to cancer her senior year of high school, the connection between her, her mother, and her now 5-year-old little sister became even stronger. Love carried them through the tragedy.

So when she began applying to colleges, the idea of moving away from their Waukegon, Ill., home definitely wasn’t an option. The farthest she’d ever traveled was just over the border into Wisconsin.

But the opportunity to be one of Saint Mary’s University’s First Generation Initiative Scholars eventually persuaded her to step out of her comfort zone.

Beltran was not part of the high school Countdown to College summer preparation program. Instead, she was introduced to the FGI program by her high school guidance counselor. She hadn’t thought much about college in middle school, but at Cristo Rey St. Martin College Prep, with encouragement, she realized a college education would brighten her future.

“I had never thought going out of state was an option because I am really attached to (my family),” she said. “I applied to two other schools in Illinois. I’d never been this far from home. Once I heard about the scholarship at Saint Mary’s, I knew it was an opportunity I had to take.”

When Beltran heard she was accepted as a First Generation Initiative Scholar, she admits, it was emotional for her and her family. “I read the email like 30 times,” she said. “When I got it, I was in shock and called my mom, and we both cried on the phone. My Mom had encouraged me. It was a future she wanted, and she wasn’t able to get for herself. It was an opportunity I was very thankful for and am still thankful for.”

Beltran’s father also proudly learned of his daughter’s accomplishment before his passing. “He hugged me. He didn’t see me cross the high school graduation stage, but he saw my diploma. It was an emotional roller coaster.”

Once she settled in Winona, Beltran quickly found the FGI program was about more than a scholarship. The sophomore psychology major says the community support and relationships have helped her grow and accomplish things she never would have otherwise.

“Being an FGI Scholar is an awesome opportunity,” she said. “I’m not very social. I wouldn’t have been interacting as much on campus without the encouragement and support I’ve received. I’m thankful I’m more involved on campus. I’m a guided study mentor and peer learning assistant. I’m also the social media manager for the psychology club, and next semester I’ll serve as vice president.”

Not one to normally reach out for help, she said she also found the academic support she needed at Saint Mary’s. “They helped me with questions personally or academically,” she said. “If I was struggling with a class, they guided me to resources like tutoring or connected me with upper classmen. It’s a small community and professors are really supportive. Last semester I had a tough time mentally. I was homesick. Faculty here acknowledge you and pay attention to what’s going on in your life.”

Through her courses, Beltran is learning more about herself and her interests. She started out thinking she wanted to major in zoology and work with animals. She quickly changed to psychology after loving her first courses. This year, she completed research classes, and next semester, she will learn more about specific disorders and the clinical psychology aspect. “I’ll see both aspects before deciding where I want to go with my career,” she said. Regardless, Beltran has always felt a calling to help others, and believes psychology is the right path forward.

“If it were not for the FGI program, I wouldn’t be where I am in my life. It’s a supportive community that is always there for me. This is a height I didn’t know if I would ever get to.

“I’m very thankful. This is a once-in-a-lifetime opportunity. I feel like they’re really helping us accomplish our dreams and our families’ dreams. They’re brightening our future.”