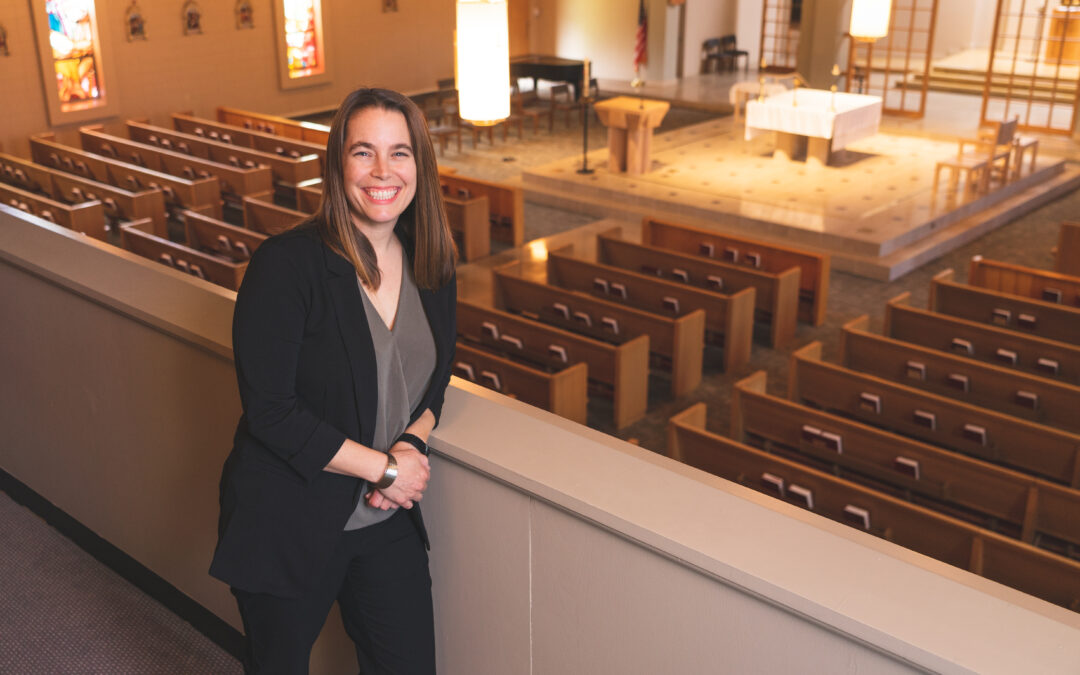 When students come to Marisa (Niemiec) Corcoran B’99 and ask the tough questions about faith and religion, her answer is clear and simple.

“My philosophy is love,” she said. “I’m going to show them so much love and show them God loves them. Conversation is important. We invite people to be honest about where they are. We open the door.”

As the director of Campus Ministry at Cotter Schools in Winona, she wants her door to always be open — mirroring the same welcoming atmosphere she experienced at Saint Mary’s University.

Coming from a Lasallian high school, she admits she never considered Saint Mary’s until her step father Jack “John” White B’79 urged her and her twin brother Matt Niemiec B’99, M’00 to take a tour.

“We took a bus trip, and I was sold,” she said. “I had the best weekend ever. I saw Brother Larry Schatz, FSC, and said, ‘I’m going to this school.’ It was love at first sight.”

Through her courses and her deep admiration for the Christian Brothers, she found her calling as a theology and pastoral and youth ministry major.

“I originally thought I was going into human services. I knew I felt called to help people,” she said. “It was a time in my life that my faith was blossoming, and I saw youth ministry as a similar path, a way to engage and help people in the spectrum of God. God is awesome, and I knew I wanted to share that with other people. I realized the people I wanted to help in their faith journey were teenagers and college students — young people.”

Corcoran immersed herself in all things Lasallian Catholic at Saint Mary’s.

“I loved the Brothers and the concept of being Lasallian, and I dove into that,” she said, detailing how she started the Lasallian Collegians, so college students could grow in faith, serve one another, and grow in community. She also took part in every opportunity Campus Ministry offered including TEC (Together Encountering Christ) retreats, urban plunges, and a S.O.U.L. (Serving Others United in Love) trip to Tijuana, Mexico.

“There were so many ways and opportunities to get involved,” she said. “I loved Sunday night Mass at 10 p.m. Afterward, we would go play darts or get together. Community was a huge part of my faith experience. We’d go caroling and then have hot chocolate with the Brothers.”

To someone unfamiliar with the term Lasallian, Corcoran describes it as three words: faith, service, and community.

“It’s feeling like you belong, are bonded, and have a shared interest or commonality,” she said. “When you do service together, that’s where that happens. Being Lasallian means reaching out to others. My job now is to touch the hearts and minds of young people which is what Saint John Baptist de La Salle did.”

Corcoran has been in her position for 16 years and says she loves her job more and more every year. “I really value the opportunity to walk with young people in exploring and learning about their faith,” she said. “Everybody connects with a different element of faith, whether it’s trips, service, Bible study … I love journeying in that whole spectrum. They are questioning God and asking those big questions, and I feel privileged to share that God is love, so no matter what you are going through, you are loved. God created you and God loves you. Brother Robert Smith, FSC B’76 told us we can love (religion) or leave it, or we can love it and make it better. As theologians, it’s our responsibility to love it, and question it, and try to understand it.”

After college, Corcoran and her husband John B’99 (whom she met in Theology 101, taught by Brother Robert) volunteered for four years in West Virginia at Nazareth Farm, a Catholic organization in a low-income area. Their mission was to serve people with home repair and a ministry of presence. After that, they moved to a Lasallian community connected to San Miguel Middle School in the Twin Cities before settling in Winona.

In high school, Corcoran’s Lasallian Youth Group described being Lasallian as “a community of believers, bound by faith, and joined in service.”

It’s this combination that keeps the college bonds of friendships strong 23 years later. “There are 10 of us who still hang out and keep in touch,” she said. “All but two of us married other Saint Mary’s graduates. We all believe in being Lasallian, and many in our group became Lasallian volunteers or taught in Lasallian schools.”

Also in high school, Corcoran remembers being told, “Just because you’re graduating, doesn’t mean you stop being Lasallian. You are always Lasallian, and we need you to be Lasallian wherever you go.

“The idea of being Lasallian Catholic is a hidden gem,” she said. “I wish we had more Lasallian universities. I think it’s a little part of the world where things are right. I wish it were more commonly known and a more common experience because it’s been so critical to the formation of who I am.”