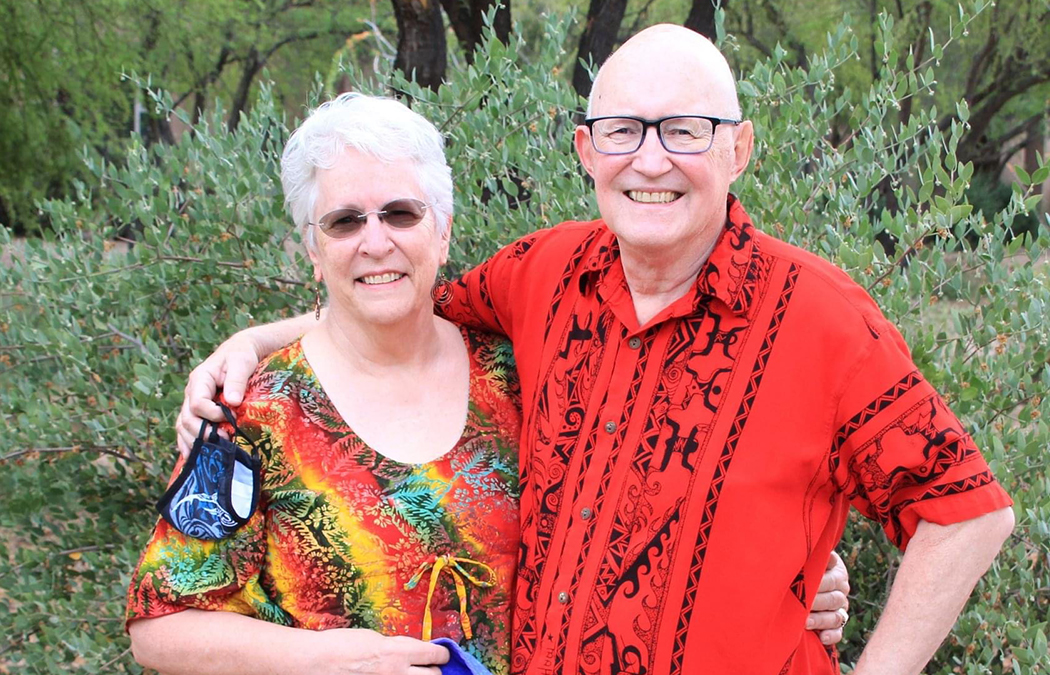 A first-generation college student, Chuck Joseph B’66 knows firsthand about Saint Mary’s University’s goal to make education accessible to every student. And it’s the accessibility to the breadth of education Saint Mary’s has to offer that has kept him close to his alma mater for so long.

Growing up during the Great Depression, neither of Joseph’s parents had the opportunity to finish their education and pursue college.

“My mother started working as a secretary at 16, and my dad ran away from home and joined a carnival at 16,” Joseph said. “Neither finished high school, so a good education was kind of a goal they set for their kids.”

Joseph became acquainted with Saint Mary’s after a De La Salle Christian Brother visited the Catholic high school he attended in the Chicago area. Besides being an affordable option for education, (According to Joseph, tuition was only $1,000 at the time.) it was an opportunity to learn from the Brothers on campus, and Joseph decided to pursue a physics degree at Saint Mary’s.

Joseph found himself on campus during a momentous time. During his junior year, the first group of female students from the College of Saint Teresa, a majority of whom were math and physics majors, began taking courses at Saint Mary’s. Joseph was also a classmate of Blessed James Miller, the beatified De La Salle Christian Brother and Saint Mary’s alumnus who died serving and protecting youth in Guatemala.

“My class produced a number of Ph.D.s, a pro hockey player, and a number of successful people,” Joseph said. “But as one classmate said, Brother James’ beatification trumps them all.”

While there were many memorable moments during his time on campus, Joseph says what he holds most dear is the time he spent learning from the De La Salle Christian Brothers.

“I owe so much to the Brothers who were at Saint Mary’s at the time,” Joseph said. “They really gave us a good education and taught me how to think and be flexible about where I was going to go after Saint Mary’s.”

The lesson in flexibility was key for Joseph as he navigated his professional life. After leaving Saint Mary’s, he first began a master’s degree in physics prior to entering the business world in 1969 building market research models for Quaker Oats.

“Business majors had no clue what to do with the computer in those days,” Joseph joked.

After a stint at Quaker Oats, Joseph continued building a career in market research, eventually landing a job at Ecolab in Saint Paul, Minn. It was in the Twin Cities where Joseph took the talents he built at Saint Mary’s and through his career and began using them to serve others, first by serving on a finance committee for the Archdiocese of Saint Paul and Minneapolis. After retiring in Racine, Wis., he continued his volunteer work, writing a monthly column for the newspaper about how to avoid senior fraud and serving on the local traffic safety commission.

It was his time volunteering with the archdiocese, however, that made him reflect on his time in Winona and want to continue to make Saint Mary’s an accessible place to those seeking an education.

Joseph has given to the university through a number of funds, as well as an irrevocable charitable trust he created. However, now he primarily gives to the First Generation Initiative (FGI), a program at Saint Mary’s focused on providing academic success for first-generation college students.

“I wish something like that had been there for me when I started college,” Joseph said. “I probably would have avoided some of the hardships I had in my first year.”

He added, “It’s a phenomenal program, and the hope of keeping Catholic education going through programs like this goes back to the whole original concept of why the De La Salle Christian Brothers were founded.”

Another major gift Joseph gave to the school was a donation to the renovation of Aquinas Hall, formerly known as the Adducci Science Center’s Hoffman and Brother Charles Halls and the Science and Learning Center. The building now houses the business, science, and psychology departments, as well as the new B.S. in Nursing program. Joseph was gratified to be able to return to campus for a recent reunion to see the new building and gain an understanding of the benefits the facility and programming inside will have on students.

“I’m pleased there is a bigger space for the sciences,” Joseph said. “Especially as the science programs continue to grow bigger and stronger.”

For Joseph, giving to help keep education at Saint Mary’s accessible — be it donating to scholarship funds or capital improvements — helps keep him connected to his alma mater. He says he regularly sees a return on investment. That especially rings true when he receives communications from FGI Scholars.

“It’s always fun to receive a handwritten note from the kids and get an idea of what’s going on at campus,” he said. “And those communications do make you feel like there is a return or reward for your giving.”