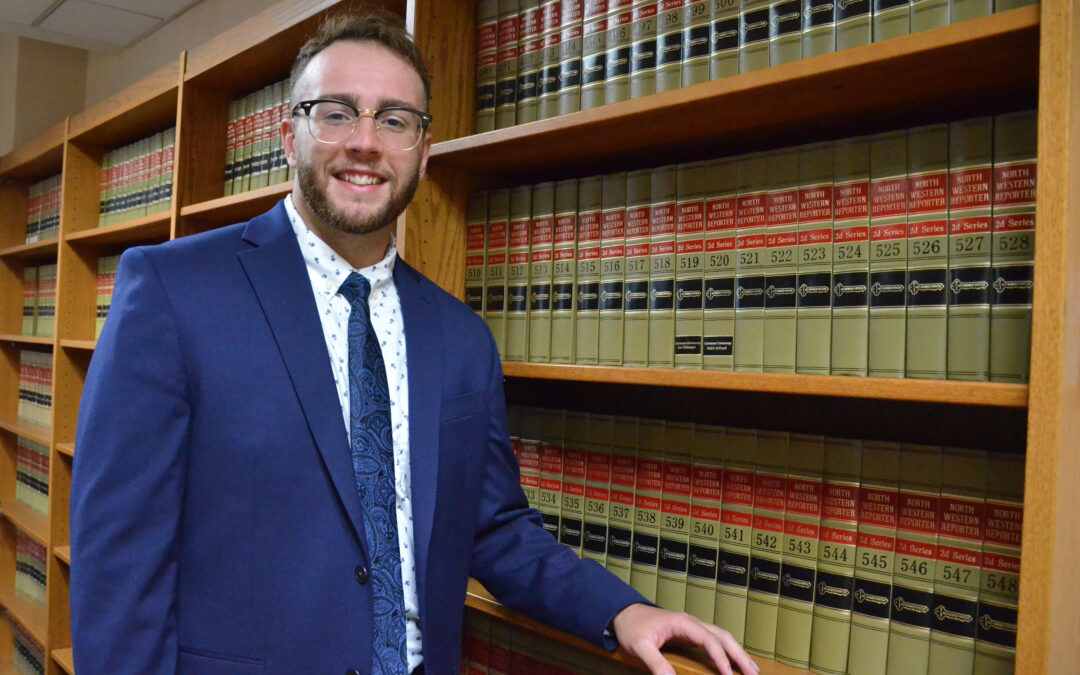 WINONA, Minn. — Nick Vanden Heuvel, an assistant public defender for the 3rd Judicial District in Winona, can tell you from experience that internships, no matter how valuable, never truly prepare someone for a career in law. The learning curve is far too steep.

“Internships are good because they help you realize, mostly, what you want to do when you get out of college,” he said. “I used to want to work for Congress in the Capitol, and that internship taught me I didn’t like that culture. I also realized I didn’t care for family law. (But, when I interned in the public defender’s office), I was hooked, and I loved the work.”

Vanden Heuvel is looking for interns who share that passion. “We’re looking for someone who believes in the mission of public defense, which is that everyone deserves fair counsel and a fair legal process,” he said, adding that someone who is a go-getter, eager to learn and to work, is also an asset.

This summer, Seth Gonring, a Saint Mary’s University junior who met that criteria, is one of two interns with Vanden Heuvel’s office. As Gonring’s dad is an attorney manager in the Madison, Wis., public defender’s office, he is familiar with their mission, And as a pitcher on the Cardinal baseball team, he knows the meaning of hustle.

Immersing himself in the internship has helped solidify Gonring’s desire to work in the criminal justice system after law school. “It solidified my plans after seeing what an attorney does day to day,” he said. “It’s not always glamorous. Attorneys aren’t arguing every day in court; there’s a lot of research and paperwork. But I think it’s incredible to watch them advocate for and help their clients, and that’s something I would love to do in the future.”

Vanden Heuvel agrees. “I have had a pretty good life … After I talked to people who didn’t have the same opportunities I had, I decided I wanted to give back,” he said. “When I started in the public defender’s office, I realized this is the greatest thing you can do with a good education to give back.

“I think a lot of people believe my job is defending bad people,” he added. “Many of us have done something that’s illegal but have been just lucky enough to not have been caught. In reality, I’m defending people who have made one mistake or a series of mistakes that they now regret, or they have an addiction they are trying to get over. I am trying to make sure their mistake doesn’t follow them for the rest of their lives. A lot of people (we represent) never come back again.”

Gonring, who is majoring in criminal justice and minoring in psychology, has found this combination of academic disciplines valuable and applicable to his internship and his future career. For example, learning in his abnormal psychology course about competency and insanity and how an individual is assessed has helped him understand better what occurs when a client’s competency is called into question.

His American constitutional law course has given him a good understanding of the amendments, which are foundational to addressing client’s freedoms. “To have the base and background knowledge of famous cases, statutes, and precedents that have been set has been valuable,” Gonring added. “I’m seeing the things I’ve learned play out in life.”

Admittedly, a lot of Gonring’s job as an intern has been what Vanden Heuvel describes as “legal Google.” Research is crucial in the day-to-day job. He’s also been helping with clerical work.

“I’ve been printing and sending out court dates to clients, closing old files, scanning information, and sending it to a database,” Gonring said, adding that his research has involved topics like evicting a tenant at will, particularity and staleness of warrants, evidence, probable cause, and when character evidence is allowed in a trial. “I also helped write a brief for a motion to suppress evidence, which I had never done before,” he said. “Each day is different.”

Vanden Heuvel said he believes Gonring will do well in law school. “He’s more than helpful. He’s also a lot of fun, and he fits in really well. Based on how he’s doing so far, I know he can hack it,” he said.

“One of the attorneys told me that if I wanted to come back in the fall, they’d be more than happy to have me help out. I’m so happy to have the opportunity to continue once the school year starts,” Gonring said. “It’s been a phenomenal opportunity to get real-world experience. Everyone there is a great person and works for a great cause. This is a great summer to learn more about what’s to come.”