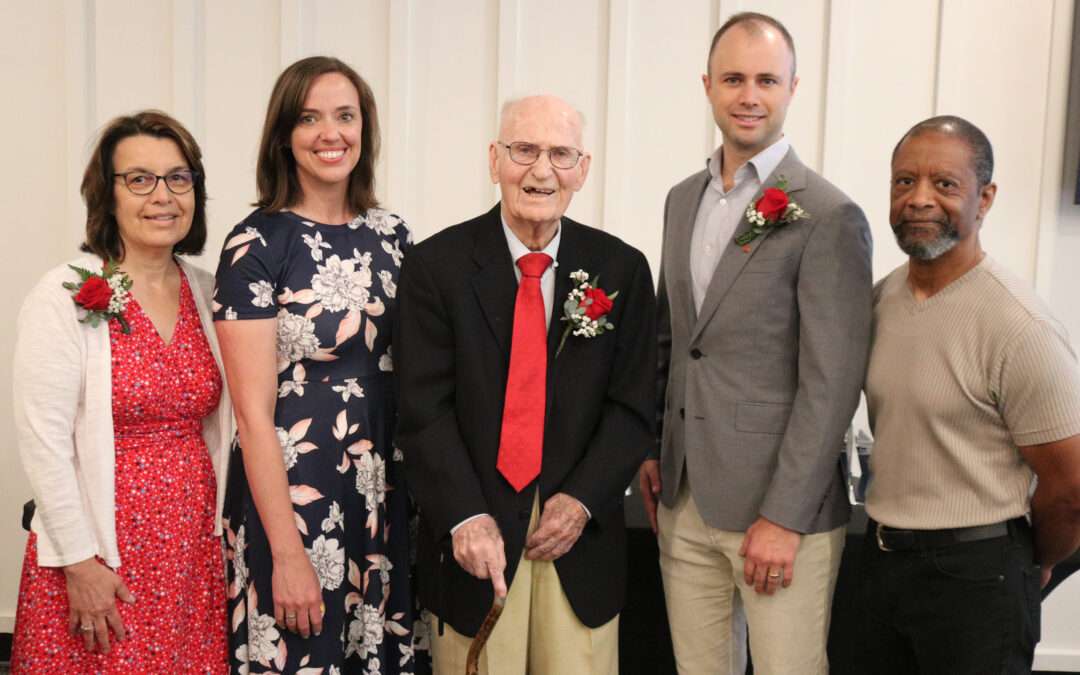 Last month, the Saint Mary’s community welcomed hundreds of alumni back to campus for Reunion Weekend 2022.

This was the first time Reunion Weekend was held in person since 2019.

During the event-filled weekend, Saint Mary’s celebrated the following individuals during the 2022 Alumni Awards ceremony on Saturday, June 25:

Robert “Bob” Skemp considers Saint Mary’s home. He and his family have been part of the university — and supported its growth — for decades. His father, Thomas Skemp, was long-time football coach from 1919-1929. Next came Bob’s older Brother Tom Jr. ’45 who joined the then college’s Navy V-12 program. Bob found his turn at Saint Mary’s in June of 1945 in an accelerated program, due to the war. He made life-long friends, played football and basketball (serving as captain in ’48-’49), studied history, and paved the way for two more brothers, Bill B’56, and Joseph ’50. Sister Eileen Gass CST’53 attended Saint Teresa. Most importantly, at Saint Mary’s, he met his wife, Frances (Perry) CST’51, and they would go on to have 10 children, many of whom also attended Saint Mary’s and the College of Saint Teresa. He went on to Marquette Law School and had a successful law career in La Crosse, Wis. In 2010, Skemp was honored by the State Bar of Wisconsin with the Leonard L. Loeb Award, which honors a lifetime of exceptional contributions to the community and to the goal of justice for all Wisconsin citizens. Bob continues the legacy of Skemp generosity, and recognizes his appreciation for the De La Salle Christian Brothers, through many gracious gifts to Saint Mary’s.

As a judge in Ramsey County District Court, from 2002 until his recent retirement, Honorable Judge George Stephenson made it his mission to make his community better, fostering relationships with community groups and creating programs and advocating for those incarcerated to make changes in their lives. Judge Stephenson initiated or helped launch the John School Program, which provides educational intervention to clients of prostitutes; St. Paul’s Community Court, a program which more assertively handles cases involving “quality of life” (neighborhood nuisance offenses with an emphasis on completing community service hours); and the Community Prosecutor Program, a group of community leaders working to devise strategies to proactively engage youth and prevent them from getting into trouble. In 2020, he received the Minnesota District Judges’ Association President’s Award for Commitment to Excellence and the Minnesota District Judges’ Foundation Award for Outstanding Service to the Community. It is only the second time that one judge received both awards in the same year. With his recent retirement from the bench, he has shifted into creating and selling horror and monster models and busts through Black Heart Enterprises. Judge Stephenson also was inducted into the SMU Sports Hall of Fame in 2000 for his wrestling successes.

Sue Fangel, who has devoted 42 years of her life to nursing, believes in the power of education and lifelong learning. At 48, she decided to enroll in Saint Mary’s M.A. in Health and Human Services Administration program. Ten years later, at 58, she needed a B.S. in Nursing degree and again turned to Saint Mary’s. In her career, she has moved through the ranks of nursing and leadership, starting as an LPN and now working as vice president/chief nursing officer for M Health Fairview, St. John’s, and St. Joseph’s Hospitals in St. Paul. Overseeing all nursing operations at two hospitals,  she particularly enjoys mentoring younger nurses and healthcare staff to learn and grow for the future. She has used her skills and her vast knowledge on the Nursing Advisory Council and is also serving on Saint Mary’s Board of Regents, the advisory board of the graduate school. She and her husband, Tim, have two adult sons, James B’08, M’19 and Andrew B’11, M’19 who are also Saint Mary’s alumni, along with their wives, Sophie (Harrison) ’B13, M’18 and Abby (Lough) B’13. James, Andrew, and Sophie also have master’s degrees in health and Human Services. They also have four grandchildren, Jacob, Charlotte, Carly, and Elena.

Sarah Jane (Engle) Maher, the director of service and social justice at La Salle Catholic College Preparatory High School in Milwaukie, Ore., has dedicated her career to the Lasallian mission. She majored in ministry and minored in music at Saint Mary’s, where her passion began through S.O.U.L. (Serving Others United in Love) trips and many other activities. After graduating, she joined the Lasallian Volunteers and worked in campus ministry at Bishop Loughlin High School in Brooklyn, N.Y. Her passion grew for radical hospitality to those facing injustices such as racism, houselessness, and generational poverty. Her career path then took her to Villanova University where she studied theology, worked in the campus ministry office, and fell in love with a fellow Lasallian Volunteer who later became her husband. Daniel and Sarah Maher, shaped by their experience with the De La Salle Brothers, headed west to Portland, Ore., where they started a lay community for four Lasallian Volunteers to work at De La Salle North Catholic High School where they were also employed. Sarah worked at DLSNC for seven years as a theology teacher and Campus Minister before moving to La Salle Prep where she works today.

Zach Cizek used his years of business acumen in the medical device industry — and a taste for entrepreneurship — into building a tasty food-related business.  Cizek works for a medical device endoscopy company, Ambu, as a regional sales director.  In his work, he oversees sales operations throughout 13 states for Ambu’s Urology & ENT division. Prior to his current sales management role, he was a field sales rep for Ambu for seven years, living in both Chicago, Ill., and the Twin Cities. While working as a sales rep, Zach and his wife, Jessica B’12, launched a successful sandwich-turned-Italian sauce business in 2013. The couple were inspired by a sandwich they had while studying abroad in Florence, Italy the summer prior to senior year. Bollito’s began, first as a traveling sandwich business at street fairs in Chicago and then pivoting into an Italian sauce company. Bollito’s sold their sauces in 175+ retail locations, including all Midwest Wholefoods locations. Zach credits Saint Mary’s for instilling the entrepreneurial spirit he’s used in both of his careers. During his senior year, he was selected as a member of the Saint Mary’s Mayo Innovation Scholar team, and during his senior year entrepreneurship class, Zach’s business plan project was to create a sandwich shop selling the Italian-inspired sandwich which ultimately became Bollito’s. The Cizeks have two children, Miliania and Callen, and currently live in Stillwater, Minn.