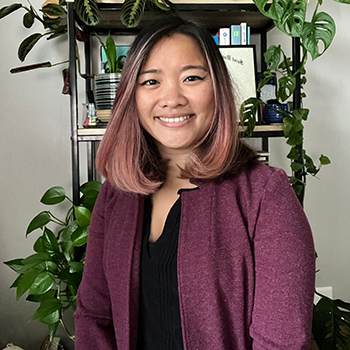 Quincy Guinadi, an international student and fourth-year counseling psychology doctoral (Psy.D.) student at Saint Mary’s Minneapolis campus, formed her worldview during her first year in the program. She was born in Jakarta, Indonesia, moved to Singapore at age 5, and came to the U.S. in 2012 to begin her undergraduate studies in Child Psychology at the University of Minnesota.

“Saint Mary’s Psy.D program was a huge change from the U. It’s a small program, very open and welcoming, and I .made lots of friends,” Guinadi says. “I also benefited by learning from strong, multicultural feminists who formed my foundational worldview – how to be human in this world – and to really understand and see things through the lens of social justice.” 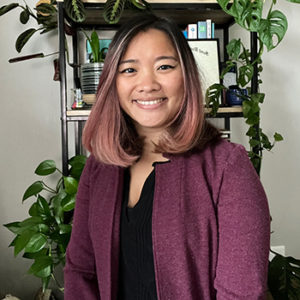 Her social justice journey recently took an important turn as Guinadi was elected 2022 chair-elect of the American Psychological Association of Graduate Students (APAGS), which serves as the main body and voice for Psy.D. students nationwide. During her three-year term, when she will serve as chair-elect, chair and past-chair, Guinadi plans to be a force in advocating about student loan debt; finances/financial support, scholarships and grants; and equity in graduate training programs.

Taking a leadership role within prestigious organizations in her field is nothing new for Guinadi. She’s been a leader in Saint Mary’s Psy.D. program and active in the Minnesota Psychological Association’s Student Division where she served as co-chair as a first-year Psy.D. student.

“A friend told me about Saint Mary’s Psy.D. program. I wanted a clinical, rather than a research emphasis, and I’m training to be a clinician at Saint Mary’s,” says Guinadi. “The early entry option, clinical focus, and the ability to graduate in six, rather than seven years, were huge motivators. Saint Mary’s faculty and my classmates have been influential in my growth as a clinician and leader, and they’ve been supportive since day one.”

As chair-elect, Guinadi will provide oversight for several APAGS task forces and committees, and be a liaison for other committees. She’ll also participate in legislative activities, meeting with U.S. Senators and Representatives in Washington, D.C., to advocate for the psychology profession.

Guinadi is excited (and admittedly a bit terrified by the huge responsibility) about the opportunity to bring her voice and advocacy to the national level, and connect with top influential leaders in psychology. She also plans to advocate for equity in graduate training programs.

“Due to COVID, there’s been a drop in the number of internships offered nationwide. Having an internship is a requirement for graduation, typically after completing all coursework,” Guinadi says. “If internships aren’t available, Psy.D. students lose a year and delay their profession (getting licensed) and income. They’d also have to pay internship application fees again the following year – a massive additional financial burden.”

Guinadi hopes to use her APAGS experience to develop her skills as a social justice advocate and ethical leader, meet other leaders, and exchange ideas for personal and professional growth. She also hopes to use her voice to uplift and advocate for others.

Her career goals are to be a good human and a psychologist who’s well informed, ethical, and engaged in evidence-based work, assisting and empowering clients to stand in their dignity as they explore their personal growth journey toward healing.

“Quincy is totally awesome, the type of student we hope to recruit and retain to become a counseling psychologist. To have a Saint Mary’s student in a national leadership role is an honor for our program,” program director and professor Ashley Sovereign says. “Our goal is to develop graduates who are committed to social justice, and Quincy truly represents the aims of our program. Quincy’s going to do such a good job. She’s just amazing.”