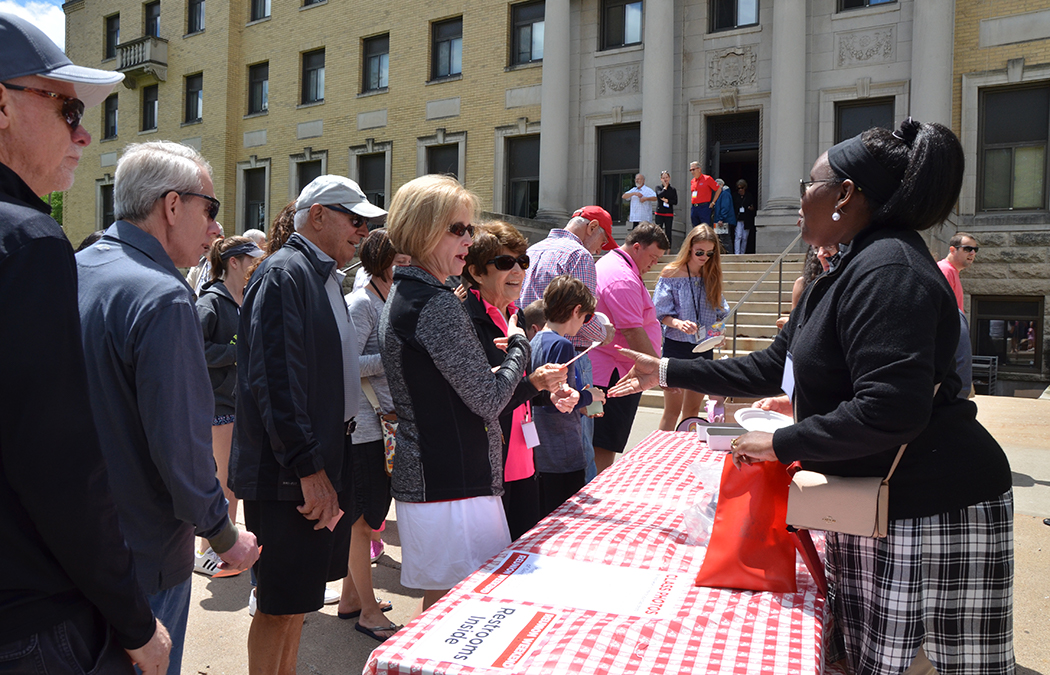 Giving time and financial support are common ways people give back to their alma maters. Saint Mary’s graduate Veronica Hiza M’15, M’17 does just that by serving as a member of the school’s alumni board.

But she gives back in another way as well.

The double master’s graduate is a cheerleader for the college and goes out of her way to spread the message of her experience at Saint Mary’s. And that has paid off.

And the list of family members who have attended Saint Mary’s doesn’t end there.

“I can probably name eight to 10 other family members,” Hiza chuckled. “It’s because I talk about Saint Mary’s, I like to advertise it. I’m pro-education as much as I can be.”

Before choosing Saint Mary’s for two master’s degrees, Hiza had been working full time in project management for the state of Minnesota. Knowing she needed to take the next step in her career, Hiza decided to take the Project Management Professional certification exam. Having known multiple people who had to take the exam more than once, Hiza decided going back to school would be one of the best ways to prepare.

After receiving her M.S. in Project Management, she felt the call to continue learning, so she enrolled once again at Saint Mary’s in the M.S. in Information Technology Management program.

Hiza says the most beneficial part of attending Saint Mary’s was learning from professionals who work in the same field as her.

“It was like being taught by a colleague,” Hiza said. “It just made it so conversational. It was always a nice opportunity to discuss real-life things and things that were happening in my job.”

After earning two graduate degrees from Saint Mary’s, she has seen the payoff: her ability to learn concepts that were included in the Project Management Professional certification process helped her through the exam. She’s also seen the real-world concepts taught in the classroom aid her in her job with Minnesota IT Services.

Not long after graduating, she was contacted about serving on the alumni board. Hiza was torn at the time because she had also been asked to serve on the alumni board of her undergraduate alma mater, the College of Saint Benedict. Ultimately, she felt her time would be better served at Saint Mary’s.

Hiza says there are many things that helped inform her decision, one of the biggest being the different perspective she’s able to bring to the table at alumni board meetings.

With a key focus on engaging with graduate students and getting them to give back to Saint Mary’s, Hiza says she’s able to share the experience of students at the Twin Cities Campus with the alumni board. A native of Tanzania, she says she is also able to bring the perspective of an international student from her experience as an undergraduate.

“I think I’ve been a voice for both perspectives,” she said.

Serving on the alumni board has also given Hiza a better understanding of the decisions made by the university.

“There are a lot of conversations people don’t think about,” she said. “For instance, how much of a struggle it is to raise funding to build a science center. If you’re not close to it, you’re not going to know.”

What drives Hiza to give her time, as well as financial contributions, to Saint Mary’s comes down to one simple belief: “Giving keeps the spirit going. That way, someone can benefit in the same way you did.”

Hiza has done her best to use her position with the alumni board to strengthen the university and support its students. This includes the opportunity to mentor two of Saint Mary’s First Generation Initiative students as they entered graduate school.

“I really enjoyed helping in that way because I do that for my kids: teach them what to do in this life after school,” she said. “So, I like to do that to other students who have graduated from Saint Mary’s or are currently going to Saint Mary’s.”

Another highlight for Hiza while serving on the board was the chance to address graduates during a commencement ceremony at the university’s Twin Cities Campus.

“It was very fulfilling just to see the excitement in their faces and to be on the other side watching that,” she said.

During her speech, Hiza urged the graduates to remain active with the university, even after receiving a degree. And it’s something she encourages all graduates to do.