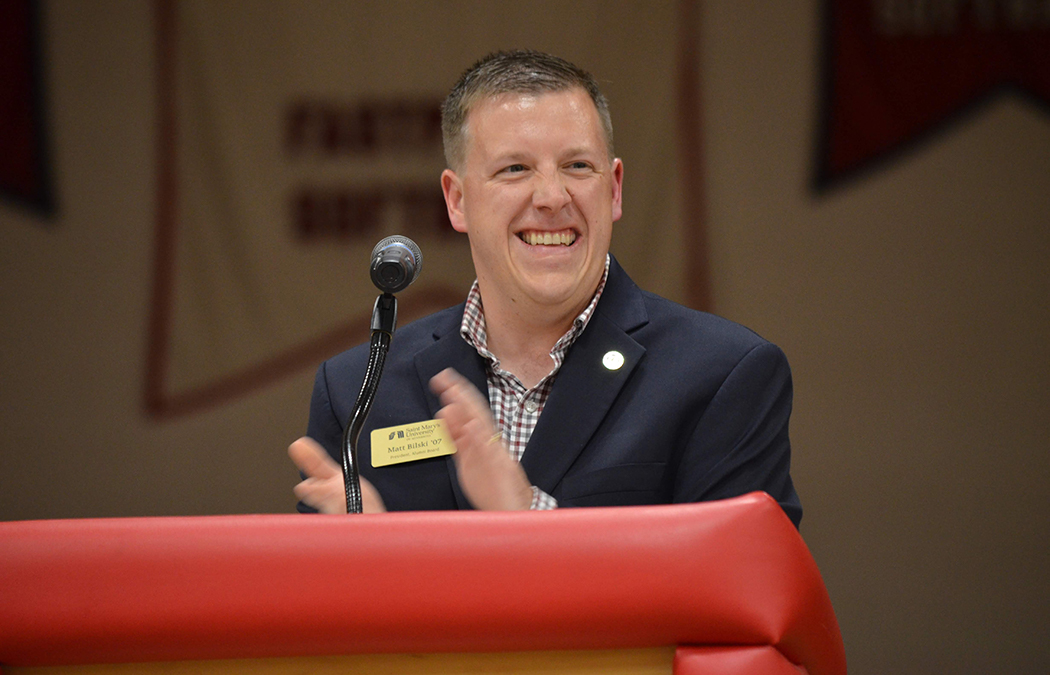 Matt Bilski ’07 originally chose Saint Mary’s because of the opportunities that existed to do undergraduate research as part of his biology degree. Working side by side with Dr. Richard Kowles, biology professor emeritus, Bilski assisted with his ongoing corn and oat genetics research, received prestigious grants, completed a summer internship, and was a contributing author on one of Dr. Kowles’ published research papers.

“Getting the experience of doing actual research at such a young age was so valuable,” he said. “It was exposure to what I began doing from day one on my job out of college.”

Bilski began working at Ecolab 14 years ago, straight out of college. Ecolab is the global leader in water, hygiene, and infection prevention solutions and services that protect people and vital resources. As lead chemist/project manager, Bilski works with new product innovation, from first-level ideation to launching the product into the market. For the past seven years, he has focused specifically on beverage and brewery customers in North America.

This is why Bilski gives back to Saint Mary’s in so many ways, including serving on the alumni board from 2015-2021 (and as president from 2018-2020) and now in a newly formed role as a young alumnus on the board of trustees.

Looking back at his and the alumni board’s accomplishments, Bilski said, a highlight was serving on the board when Father James P. Burns, IVD, Ph.D., was named president.

He is also proud of the work the alumni board made in setting clear goals and objectives and working toward them as a team, particularly in the areas of development and engagement with both graduate and undergraduate alumni. “We’ve had upwards of 30-40 people apply for open board positions. It is phenomenal that we have that much interest from those wanting to be part of the alumni board,” he said.

Representing 54,000 alumni, he said, was both rewarding and humbling. “I’m not necessarily going to see eye to eye with everyone all the time, but I hope my time on the board and as a trustee can be seen as a positive and influential voice on behalf of the alumni for Saint Mary’s now and in the future,” he said. “If, 10-20 years from now, nobody remembers I was on the board, but the things we tried to do are still going strong, that to me would be the ultimate legacy.”

One of the best parts about being on the alumni board, Bilski said, was the opportunity to be more involved with the university on a deeper level and re-connecting with faculty and staff, as well as meeting new employees.

He looks forward to further building those relationships on the board of trustees, and he’ll bring new insight to the board as someone who can relate well with the university’s graduate students, who are often balancing families and careers.

“I hope I can bring a voice, especially for the young alumni,” he said. “The trustees are more experienced in their careers. I have three young children, and my wife and I are still in the early middle stages of our careers. I may bring a different perspective to the discussions, and I look forward to working with them.”

He and his wife Jocelyn also generously support Cardinal Athletics, the Saint Mary’s Fund, and the Science Initiative.

“On the alumni board, our passion project is the annual fund, which isn’t exciting but it’s important, and it allows for so many things to happen,” he said. “And the new addition to Aquinas Hall (which now encompasses the former Adducci Science Center and the former Science and Learning Center) continues to expand research opportunities for students across disciplines.

“This mirrors many industries today and is a crucial connection I am thrilled to see being embraced by Saint Mary’s,” he said. “I think the direction the university is going with the deliberate merging of the sciences and business together is such a great idea. It
is such a smart way to look at the future.”

Bilski’s position is a prime example of this pairing. At Ecolab, he said 60-70% of his work is more business-related and 30-40% is a science research role. “Most people with biology degrees are going to end up doing something in the private sector with a publicly-traded company. Having that understanding of business and technology and how those things come together and getting exposed to that at such a young age is so beneficial.

“I look back very fondly on my time at Saint Mary’s,” he added. “I think a big part of who I am today is because of the experiences I had there. I want those students there now to have similar experiences. My family has always been very philanthropic, so I grew up in that environment. When I find organizations that have benefitted me and that I believe in strongly, I want to support that. College is expensive, and I really value the Lasallian Catholic nature of the university. The ethical and moral components students receive as part of the Lasallian education are beneficial for students as both individuals and in their professional careers.

“At Saint Mary’s, you learn a specific skill but also what type of person you want to be.”