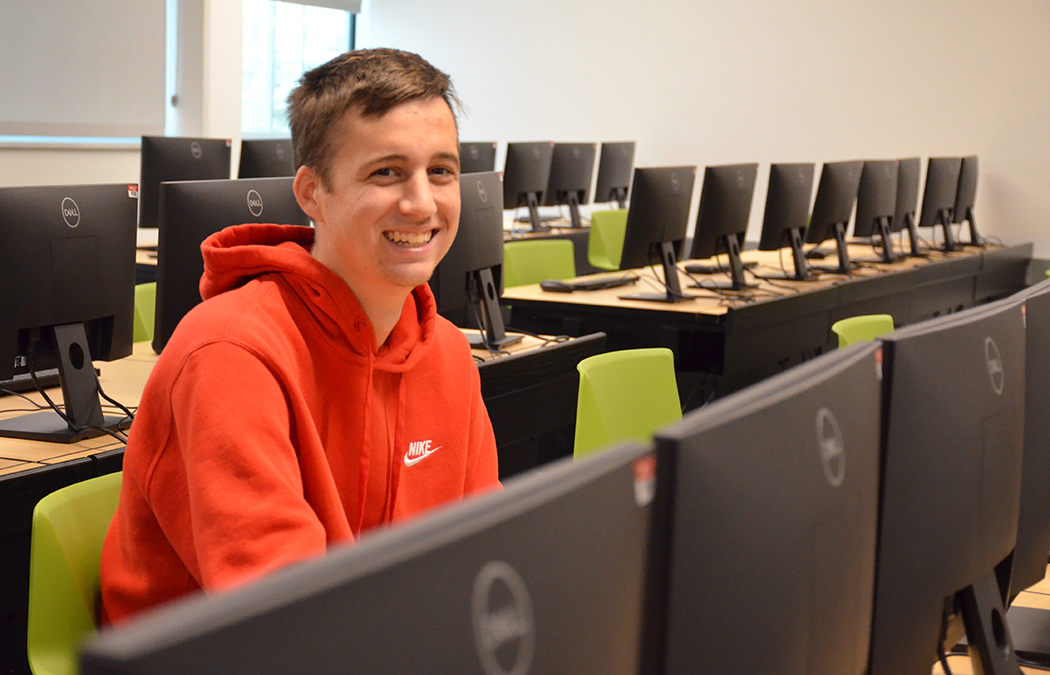 Jacob Clements has always been fascinated by mathematics-centered problem solving.

“Everything has to be right or wrong,” Clements said. “There’s an objectiveness and logic to it.”

Clements has found a workable algorithm for his busy schedule of his junior year at Saint Mary’s University of Minnesota.

The Holmen, Wis., native is currently working on three majors (software design, cybersecurity, and mathematics) — while also serving as a starting midfielder on the men’s soccer team. 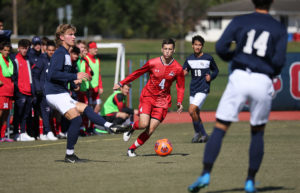 On top of that, he is working 15 to 20 hours a week as a remote software development intern out of his dorm room for Trane Technologies based out of La Crosse, Wis. His shifts begin most days at 6 a.m. so he can have real-time communication with his team members, some of whom live in India.

Furthermore, Clements estimates that he devotes 16 hours a week to soccer-related activities — and that does not include any time traveling for road games.

Yet, you will not find Clements complaining one bit about his daily schedule on the Winona Campus, after he found the ideal university that had the combination of being Catholic, close to home, with the majors he wanted, and the opportunity to play soccer at the collegiate level.

“All the things I wanted fell into one place,” said Clements, who also appreciates the small class sizes and the sense of brotherhood he has with his teammates at Saint Mary’s. “I took a tour here, and I just fell in love with the campus.”

His internship with Trane also fell into place. When the COVID-19 pandemic hit, the computer science internships that he was searching for had seemed to all disappear, given the new unprecedented challenges that companies suddenly faced. He jumped on the opportunity to apply at Trane when the ad appeared.

Clements began his internship in May after finishing his sophomore year. In the summer, he worked 40 hours from his family home, where he began adding features to computer-aided design (CAD) software called TRACE 3D Plus. Trane — who manufactures HVAC and building management systems — uses the software to let clients create their own buildings, and then run various simulations to determine estimated costs.

“It will tell you how much the building upkeep will cost and how much energy is spent to make you optimize the best building,” Clements said.

Donald Heier, D.Sc., professor of computer science and director of the M.S in Cybersecurity program, has taught Clements in several courses.

“He will find solutions because he likes to learn — not because I am forcing him to,” Heier said. “He wants to learn, so he takes it on himself and does a good job.”

Clements said that Heier is one of the faculty members who has made the most significant impact on his academic career because of the way he approaches teaching.

“He wants you to struggle, because he knows when you struggle through something you’ll actually learn and remember it more,” Clements said.

Upon his anticipated graduation in the spring of 2023, Clements plans to be a software developer — and he would not mind continuing his journey with this current employer.

With a year and half left in his college career, Clements is grateful for the opportunities he has to continue working and learning at Trane, and wherever the future leads him, he’ll be ready to hit the ground running and score a fulfilling and challenging career.

Featured image: Jacob Clements has been working as remote software development intern for Trane since May.