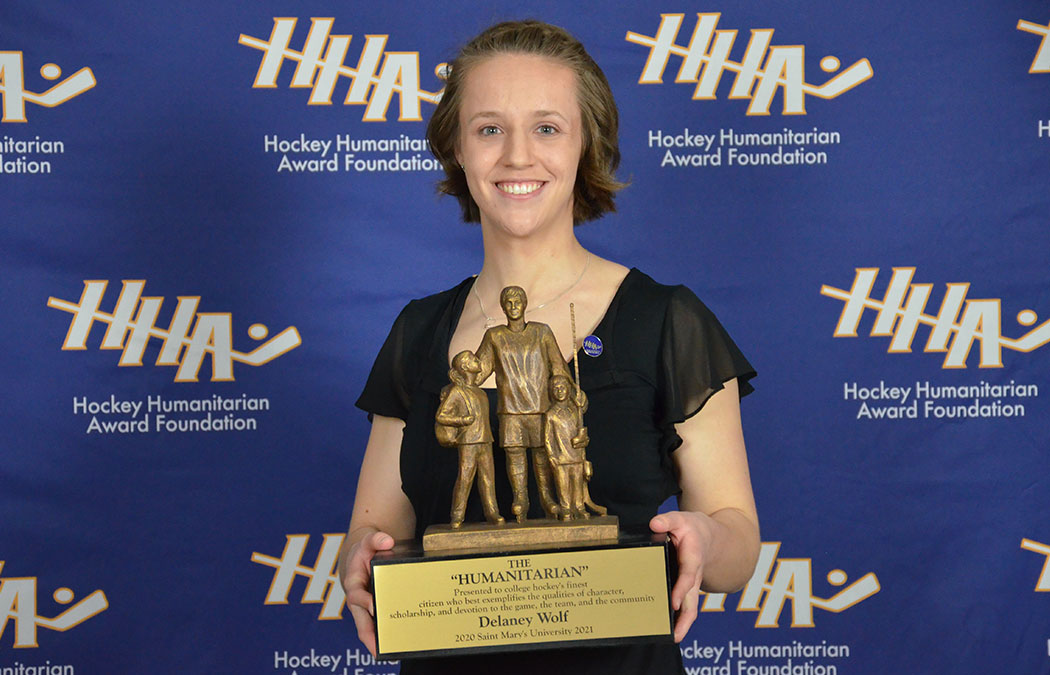 WINONA, Minn. — Saint Mary’s University senior Cardinal hockey player Delaney Wolf is a blur on and off the ice.

In addition to her responsibilities as a team captain and student-athlete, she balances the rigors of carrying close to a 4.0 GPA as a double major in biochemistry and Spanish, and is active in an abundance of extracurricular organizations ranging from Biology Club to Concert Band.

Above all, this future med school student has made it her mission to help others — she tutors students, mentors youth hockey players, volunteers with the Humane Society, and works with the local warming center. Her service encompasses all ages, from tutoring elementary Spanish immersion students to interacting with residents at local senior living communities. 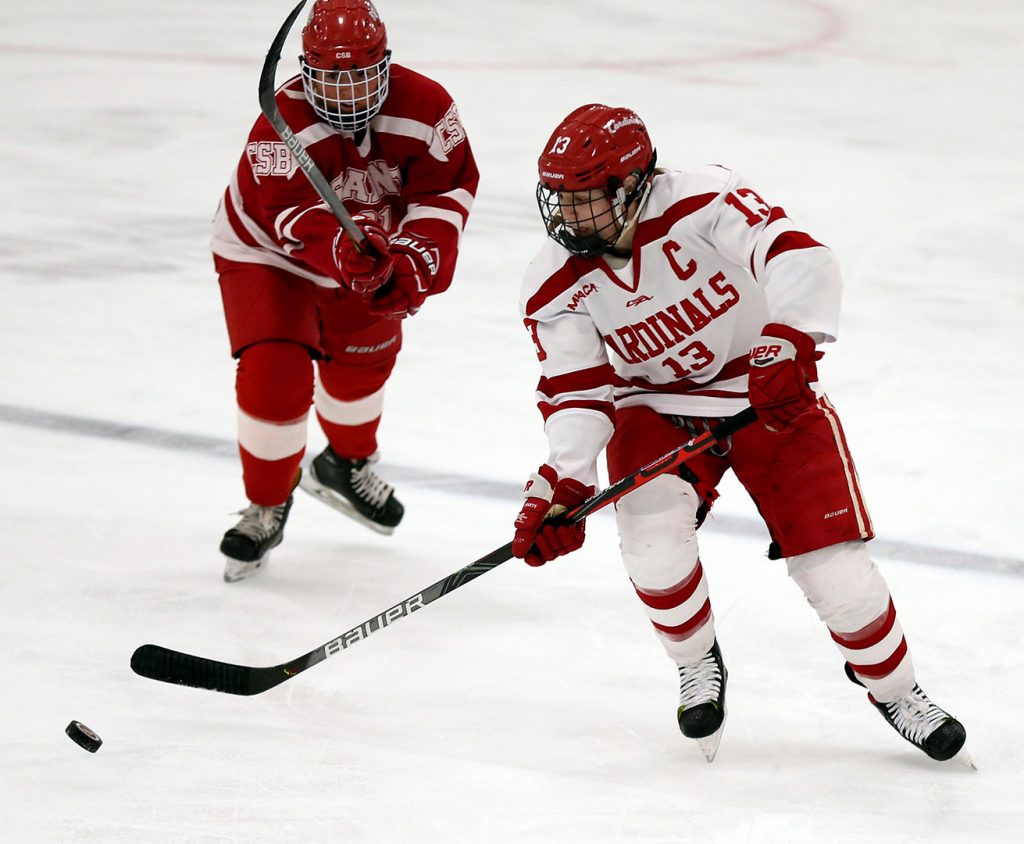 In its 26th year, this award is presented annually to college hockey’s finest citizen — a student-athlete who makes significant contributions not only to his or her team but also to the community-at-large through leadership in volunteerism.

And this year, Wolf can add yet another accomplishment to her ever-expanding résumé — recipient of this prestigious award.

Wolfe was recognized virtually Friday, April 9, during the Friday Night at the Frozen Four ceremony, and her Saint Mary’s community was able to join her in celebration during a viewing party.

“I am so grateful to have been given this opportunity by my coaching staff and could not have been so involved in the community without the encouragement of my teammates, friends, and professors,” said Wolf. “It’s an honor to be chosen, especially in light of the incredible accomplishments of the other candidates.”

“Each season, it is exciting to learn about many exceptional student-athletes who are committed to volunteerism,” said Matt Patrick, executive director of the Hockey Humanitarian Award Foundation, noting that Wolf is the 10th female — and just the eighth NCAA Division III student-athlete — to win the Hockey Humanitarian Award. “Delaney’s academic and athletic achievements, leadership, and long-term community focus are remarkable; we are delighted that she is this year’s recipient.”

Wolf has proven to be a team leader from the minute she stepped on the Saint Mary’s campus. Voted a team captain as both a junior and a senior, Wolf is beloved by her teammates, coaching staff and Saint Mary’s professors — because they all know she is going to bring her best to whatever she is asked to do.

“We are incredibly honored that Delaney was selected as this year’s Hockey Humanitarian Award recipient,” said Saint Mary’s women’s hockey coach Sarah Murray. “We know it was a tough year for volunteering and community involvement, but Delaney has made the most of a tough situation — and her history of selflessly giving back speaks for itself.

“We are incredibly proud of all of Delaney’s accomplishments, both on and off the ice, and her commitment to serve the people around her.”

Wolf said she believes serving others builds a connection, and that connection is what makes a community. Because Wolf values the Saint Mary’s community and the wider communities of Winona, Minn., and her hometown of Bismarck, N.D., she believes volunteering is a great way to give back.

“I am ecstatic and so happy for Delaney in receiving this tremendous honor,” said Brian Sisson, Saint Mary’s athletic director. “Delaney truly embodies what being a student-athlete at Saint Mary’s is all about. She is such a high-character individual who is a servant leader for others in everything she does. Her incredible success as a student, first and foremost, as a student-athlete, and in helping those in need is something we look for all our student-athletes to emulate.

“She is a leader who is always looking to where she can lend a hand to those in need,” Sisson added. “I am so proud of Delaney and know she will go on to set the world on fire and make Saint Mary’s proud.”

The Hockey Humanitarian Award Foundation presented Wolf with a check for $2,500, which she has donated to Catholic Charities of Southern Minnesota for the Winona Community Warming Center. Additionally, she and the other HHA finalists each received $500 for their respective designated charities. These donations from the HHA Foundation are possible through the generous support of the award’s partners and donors. 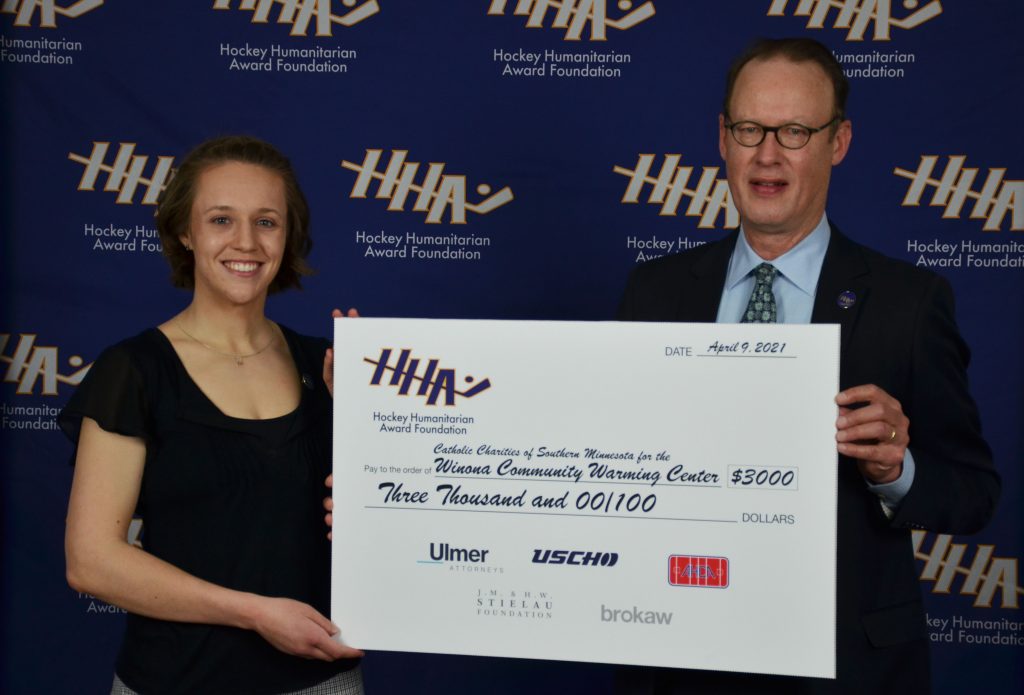