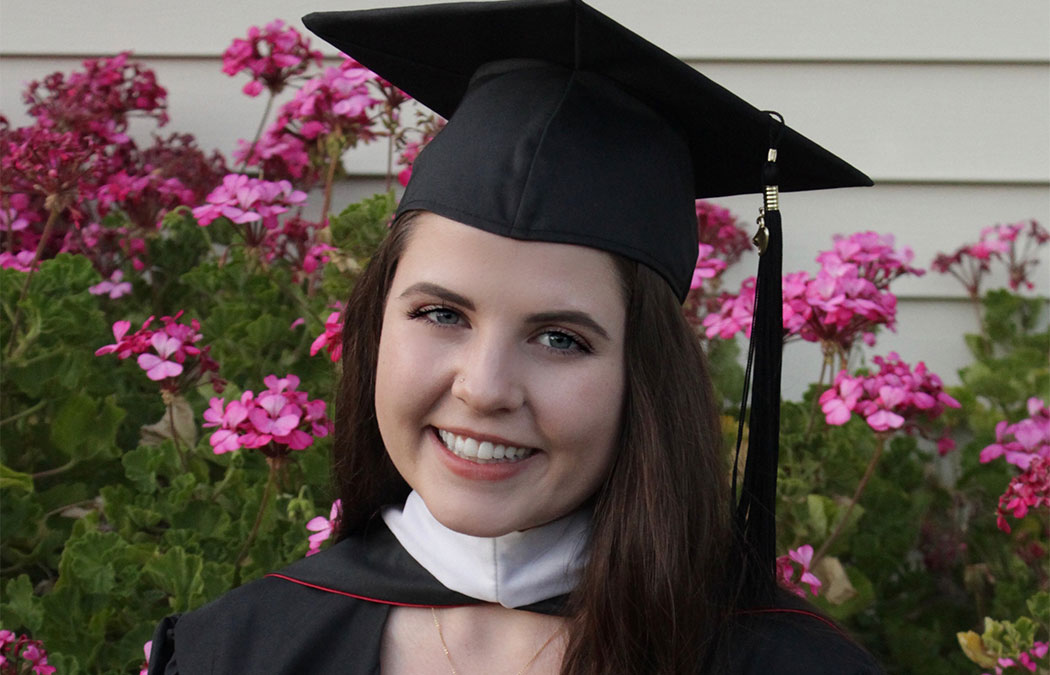 When Celeste Russell came to Saint Mary’s University of Minnesota in 2016, she was fairly certain she would finish her studies with acting as her major. However, with the support of a couple of professors and an influential internship, she now has a degree that reflects more of her passion and her talent.

Celeste graduated in May 2020 with a degree in Acting and Communication for the Arts and she is presently the social media coordinator for The National Institute for Social Media (NISM). But the journey to her life after Saint Mary’s was anything but direct.

“Professors Dean Beckman and Steve Schild are really wonderful people, and I received so much support from them,” Celeste said. “In fact, Professor Beckman helped me to map out an individualized curriculum after I realized my love of communications was becoming as strong as my love of acting.”

Her affinity for both came very naturally. She is a proud native of Las Vegas and cultivated her passion for theater while attending high school there, where she also enjoyed speech and debate. Celeste’s mother is a journalist and took her to countless live theater productions as she was growing up. “Going to the theater was something we always enjoyed doing together,” she said. “And my mother excelled in communication and I always looked up to her for her storytelling ability.”

The theater connection is what brought her to Saint Mary’s. She attended a national thespian festival where high school students audition for colleges across the country. She applied and was accepted at 15 colleges, but it was the extras she noticed even before enrolling that sold her on Saint Mary’s. “The school really worked with me to put together an attractive scholarship package,” Celeste said. “But it was the personal touches that really impressed me – hand-written notes, even driving my mom and I to the airport after our tour. Plus, studying abroad is built into the program, and that was important to me.”

It’s while studying abroad as part of the university’s London theater production that she put some of her communication skills to work and solidified her interest in that aspect of her degree. She realized there wasn’t much going on promotion-wise for the show and spearheaded an effort to change that. She created a poster which was hung throughout London, a promotional video, and social media posts.

“The effort resulted in two sold-out performances, a huge increase in attendance from previous years,” Celeste said. “The groundwork was laid, a successful template created, and the class after had someone do much of the same as I did with equal success.”

About six months later, Celeste learned the two women leading the NISM were looking for a freelance content creator to help promote programs and she was looking for a job that worked well around school. She was hired and after completing the freelance project, she accepted the internship offer.

“It was very powerful to work alongside Amy Jauman and Jenifer Radke, two accomplished women in the field,” Celeste said. “They are caring and kind individuals who pushed me and I learned a lot. They are mentors, but also friends.”

Following the internship, she was hired by the company as their social media coordinator. She credits much of her success with NISM to her studies at Saint Mary’s. Celeste explained that Professor Beckman and Professor Schild had complementary strengths, with Schild focusing on the nitty gritty details and editing, while Beckman explored how communications impacted the real world. “They greatly prepared me for the real world, challenging me, and pushing me to do my best,” she said. “I never once turned in a sub-par assignment because I knew better.”

Celeste mentioned that one of the most valuable classes she took was the Lasallian honors track. She said she enjoyed the Socratic nature of the classes and learned so much from reading the classics – Homer, Aristotle – and the follow-up discussions. “The track deepened my confidence as a speaker, made me a better listener, and really shaped me as a person.”

If she could do one thing over again, she mentioned taking better advantage of the diverse opportunities college life offers. “During my senior year, my boyfriend and I decided to say yes to almost anything and the experiences were so enjoyable,” Celeste said. “I wish we had been a little less focused on the school work and had decided to say yes to more things sooner. It allows you to experience a broader Saint Mary’s experience.”