Klein, who most recently served as vice president of university development and alumni engagement at Buena Vista University in Storm Lake, Iowa, is no stranger to Saint Mary’s. A Saint Mary’s alumnus, with a Master of Arts in Philanthropy and Development, Klein spent several years in progressive leadership roles in advancement at Saint Mary’s early in his career. 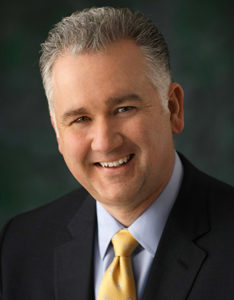 Prior to Buena Vista, he served as vice president for institutional advancement at Edgewood College in Madison, Wis., from 2015-2019. There Klein completed and surpassed a campaign that funded the 2017 construction of a new residence hall. Additionally, he developed and implemented an advancement plan that strengthened fundraising infrastructure resulting in a systematic process capable of predictable results, regular growth, and more. During his tenure, he secured the largest gift commitment in the history of the college.

Klein also previously served as vice president for institutional advancement at Viterbo University in La Crosse, Wis., from 2002 to 2015, during which time he oversaw two successful capital campaigns and increased fundraising by more than 400 percent.

“Gary Klein has 25 years of experience in development and is a proven leader with a collaborative vision,” said Father James P. Burns, IVD, Saint Mary’s president. “He has a proven track record in major gifts, advancement leadership, managing capital campaigns, and growing affinity and engagement with alumni and benefactors. He will be an excellent fit to help us advance our strategic plan, build strong and innovative partnerships, and to further our Lasallian Catholic mission.”

“I’m very excited to be returning to Saint Mary’s,” Klein said. “The mission of Saint Mary’s has always resonated with me very deeply. The commitment this university’s benefactors have continued to show in not only furthering — but also elevating — its important educational mission is inspiring, and I look forward to what we can accomplish together.”

His wife Melissa, who is originally from the La Crosse, Wis., area, is a managing partner at PeopleFirst HR Solutions.