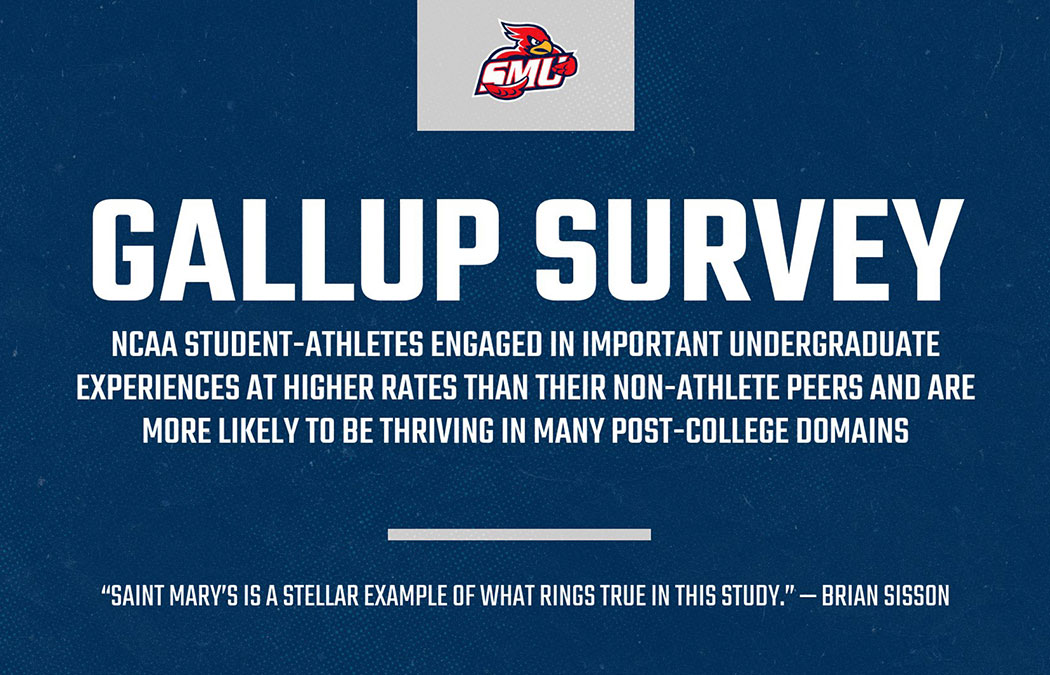 WINONA, Minn. — According to a 2020 study, Gallup found that NCAA student-athletes engaged in important undergraduate experiences at higher rates than their non-athlete peers and are more likely to be thriving in many post-college domains.

Which comes as no surprise to Saint Mary’s University athletic director Brian Sisson.

“Saint Mary’s is a stellar example of what rings true in this study,” Sisson said. “Our student-athletes are well-rounded, very active across so many spectrums of campus, and leaders into their careers and communities after graduation.

“The support our student-athletes get from our coaching staff, support staff, and the faculty and staff across campus is remarkable. Together, they leave a lasting impact and make for a memorable experience on campus for all.”

Gallup interviewed nearly 5,000 former NCAA student-athletes about their college experiences and current well-being, and compared the responses to 69,000 non-student-athlete graduates from the same colleges.

According to the study, NCAA student-athletes (55%) are much more likely than their non-athlete counterparts (31%) to have held a leadership position in a club or organization such as student government, a fraternity or sorority, or an athletic team.

The study also found that NCAA student-athletes (70%) are more likely than their non-athlete peers (65%) to have graduated college in four years or less, and they are half as likely to have taken more than five years to graduate (6% vs. 12%)

“From the academic experience, to the numerous leadership lessons learned, to graduation rates and further education, college athletes strive and achieve greatness,” Sisson said. “I would not be here today without my experience as a former student-athlete. It has helped shape me into who I am today.

“Kudos to our exemplary athletic staff, who do so much to mentor our student-athletes — so many of whom were student-athletes themselves,” added Sisson. “Lastly, as mentioned in the study — on giving back to their institutions financially after the fact — I want to thank all of our Cardinal athletic alumni who choose to support our current and future generations of student-athletes here at Saint Mary’s.”