‘We can have a better life’: Public health alumnus recalls own American journey, works in fight against COVID-19 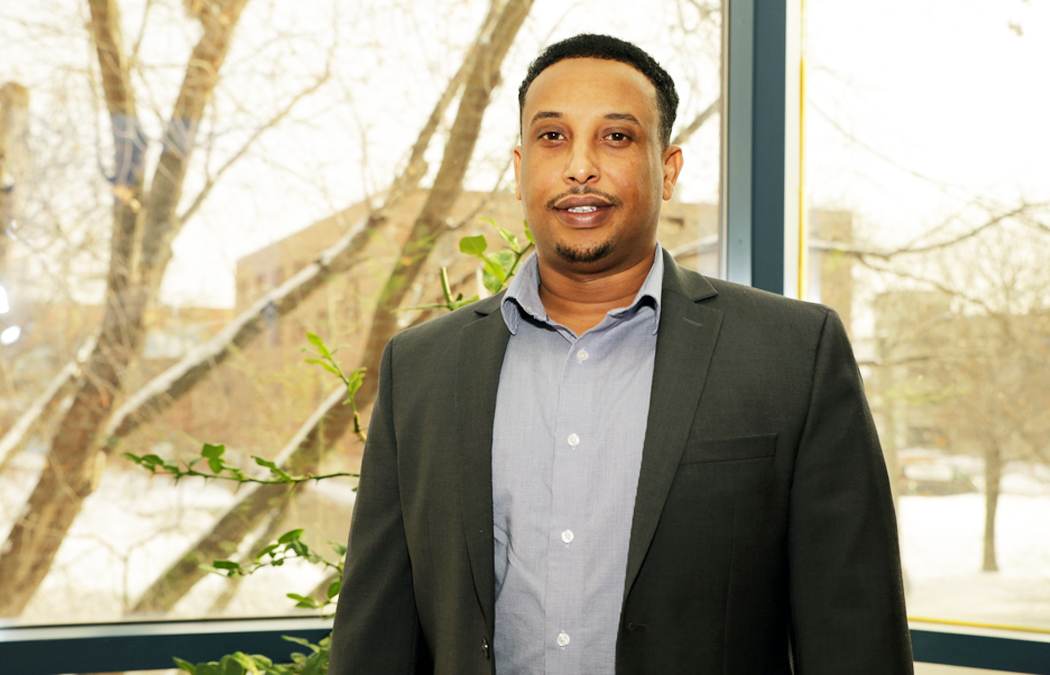 When he can find the time, Okash Haybe ’19 enjoys reading books — in particular, non-fiction books on public health issues. One of his favorites is “The Audacity of Hope: Thoughts on Reclaiming the American Dream” by former President Barack Obama.

Haybe’s American dream began in Minneapolis in 2005 as a teenage immigrant from Somalia by way of Kenya. Upon his summertime arrival with his family, Haybe could not believe how different his new home was.

“It was exciting because we had that sense of anticipation … Here is the United States … We can have a better life,” said Haybe, who graduated from the Saint Mary’s bachelor’s completion program in public health.

‘I had a big ambition’

He was determined to “be independent right away,” a quest paved with the intention of getting a full-time job as soon as he completed high school at Wellstone International High School. In 2007, he began working as a finishing operator for Protolabs, a digital manufacturing company that primarily makes specialized parts for medical devices, cars, and other large machines — and ended up ascending to the role of digital manufacturing designer 10 years later.

Okash Haybe ’19 earned his B.S. in Public Health through the bachelor’s completion program on the Twin Cities Campus.

“I had a big ambition,” Haybe said. “When you’re young, sometimes you’re a little bit naive. You think everything is going to be the way you want it to be with all of these opportunities. Looking back, it worked really great. I did complete my education. I built a family. I really think I did my best.”

Now, he works for the Minnesota Department of Health among his fellow Somali community members as a case investigator related to the fight against COVID-19 — after completing two bachelor’s degrees from Saint Mary’s, including a bachelor’s degree in healthcare and human service management in 2019 as well.

He said his whole perspective on public health has changed following the onset of the pandemic, especially concerning the importance of matters relating to prevention at all levels. He believes the new normal will not only bring more jobs in the public health sector, but also more public health students to fill those jobs.

“It will definitely influence a lot of young people, because now people better understand the consequences of infectious diseases,” Haybe said, “People now understand the significance and the need for public health. People now know the importance of taking preventative measures to stay healthy and safe.”

“It will definitely influence a lot of young people, because now people better understand the consequences of infectious diseases. People now understand the significance and the need for public health.”

Farhiya Farah, Ph.D., program director of the bachelor’s completion and Master of Public Health programs, said Haybe was a student who from day one, “was enthusiastic to delve into the public health practice.

“I was impressed by his eagerness to actualize what he learned in class to practice, and especially within the marginalized community,” Dr. Farah added. “I am confident his passion for the field of public health will someday advance the practice of public health in our communities.”

That enthusiasm for public health was a result of his own struggles from an event he does not dwell upon. 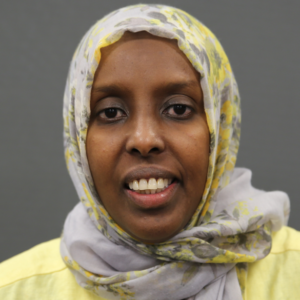 “Going back to it and explaining that over and over again, it’s easier just to move forward,” Haybe said.

When Haybe was about 5 years old, his home country of Somalia was roiled in the beginning of a civil war, in which government and rebel forces alike contributed to what Haybe describes as chaos. “The families got caught in between,” Haybe said.

One day, during a confrontation, Haybe was shot in both of his legs. Immediately afterward, his family fled to Kenya and never returned. Being refugees in a foreign land, proper medical care proved to be impossible.

‘You get to help people’

When he first thought about his long-term career plans, Haybe wanted to be a doctor, so he could provide the medical care he lacked when he was a child to others. After doing the research, he realized the public health field may be a better fit.

After completing his associate’s degree in health sciences from Century College in White Bear Lake, Minn., in 2017, Haybe looked for a program in which he could complete his bachelor’s in public health, while still not making any major alterations to his life. Haybe and his wife both worked full time to provide for their three young children, so convenience was key. He was drawn to the fact that Saint Mary’s did not require any weekday morning or weekend classes.

“I found that I could get off from work and come right to school. The time was really perfect,” said Haybe, who also enjoyed the smaller class sizes. “You can get your idea across and you can ask questions. You know the professor is connected to you.”

“I found that I could get off from work and come right to school. The time was really perfect. You can get your idea across and you can ask questions. You know the professor is connected to you.”

In addition to attending class, Haybe would often stop by Dr. Farah’s office to discuss topics relating to public health. He admitted that he cannot watch the evening news without seeing all of the public health issues that surround the headlines.

“She opened my eyes to what public health really is,” said Haybe, who helped establish the Public Health Student Association.

Haybe’s educational journey continues as he considers pursuing a Master of Public Health degree (with a focus in epidemiology) or enrolling in a physician assistant program or environmental health program.

One thing is certain: He is determined to improve the collective health of underserved communities to help their members better realize their own dreams.

“I understand the language and the culture,” Haybe said. “I’m in the community. I know their needs.”