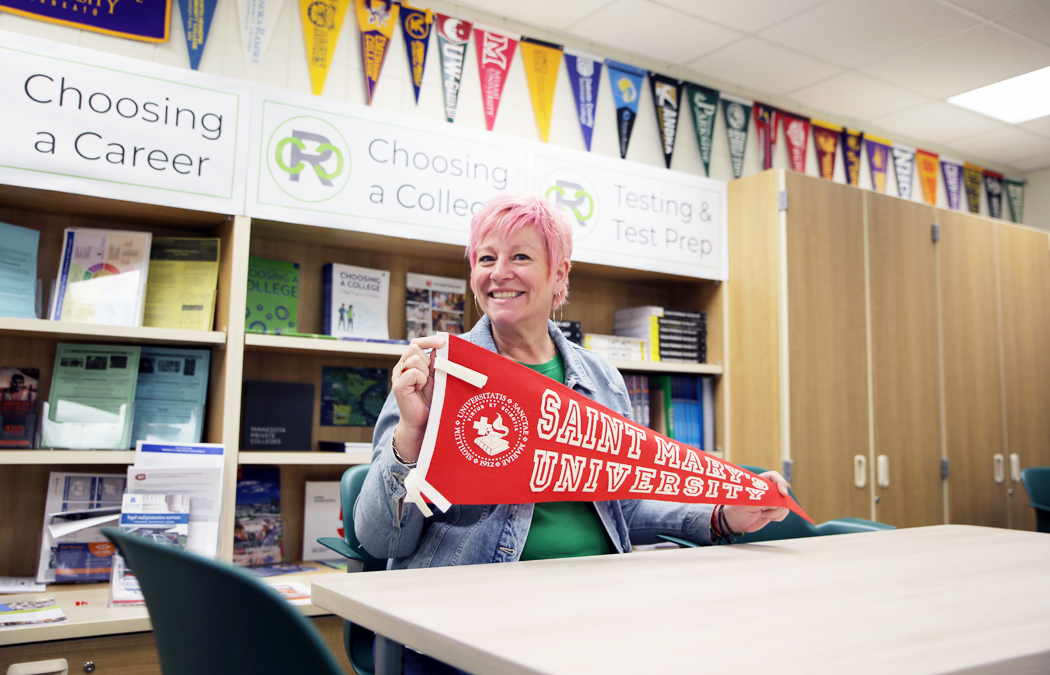 Sitting in the counseling center of Park Center High School with a row of college pennants hanging above her bright pink hair, Sara Schreiner M’97 loves to surround her life with colors — both in a traditional sense and with the colorful experiences that she has had traveling and studying all over the world.

“Her passion for helping students is unmeasurable,” said Jody Hansen, the educational support professional assistant at Park Center who works alongside Schreiner. 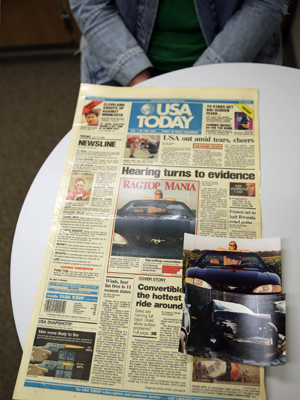 Sara Schreiner displays the front page of USA Today from July 5, 1994, in which she was featured on the front page for a story about the then new Ford Mustang GT. She had just purchased the car after recovering from a serious car accident (see photo in the lower right corner).

As someone who survived a car accident that involved a 90-mile-per-hour impact and is now in remission after battling stage-four melanoma skin cancer for four years, Schreiner knows how precious life can be.

“I call myself a cat, because I am truly on my fifth life,” she said.

As a career resource specialist, she helps the students at the school in Brooklyn Park, Minn., color their own lives by advising them on post-secondary opportunities, whether that be at a two-year college, a four-year university, trade school, or apprenticeship program.

“There are so many different options for kids and there is a path for absolutely everybody,” said Schreiner, who earned her M.A. in Education at Saint Mary’s through a cohort program established at Park Center, while she taught as a world language instructor at nearby Columbia Heights High School.

Schreiner joined the cohort, at the urging of Mary Condon, whom she student-taught with at Park Center as an undergraduate student. Schreiner and Condon would go on to travel to six South American countries in the span of six and a half months to collect data and interview families to study how gaining a better understanding of the countries’ cultures could help assist foreign language instruction practices.

Their work, which involved reviewing more than eight hours of video tape interview footage, provided the foundation for their master’s project, which earned them the honor of the Outstanding Final Paper Award when they graduated. They have maintained their friendship, while continuing to go on international trips. 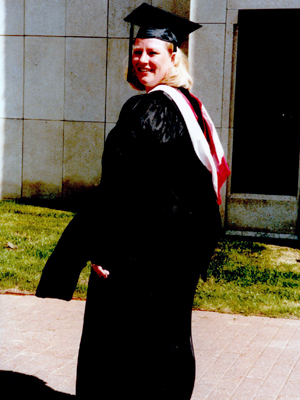 Sara Schreiner at Commencement in 1997 on the Winona Campus.

“It was very personalized. I knew who my teachers were and I got to know the people with whom I was working,” said Schreiner of her time in the program.

One of the main reasons she enrolled at Saint Mary’s can be derived from wisdom bestowed upon her father when she was a young girl: “‘People can break into your house, they can steal your car, they can take your stuff, but they never take away your education or your experience.”

Schreiner began collecting experiences when she was a junior in high school and traveled to Spain for the first time with a group of students. She ended up adoring her host family and spent an extra five weeks with them. She has since revisited Spain at least 20 times.

After spending 11 years in secondary education in various capacities, she decided to try her hand in the business world, becoming an executive team leader at the Target store in North St. Paul in 2002, before moving into store team leader roles at stores in St. Cloud and Rochester, Minn. After seven years at Target, though, she realized that her heart was calling her back to education where her career began.

“There’s lots of things I learned in the business world that I can apply here,” said Schreiner.

“The experience at Target helped me realize how much I really do enjoy working with high schoolers.”

Featured image: Sara Schreiner M‘97 is on her “third tour” at Park Center High School in Brooklyn Park, Minn. She began her role as a career resource specialist in February 2019 after working as a Spanish teacher at the school for five years before that.