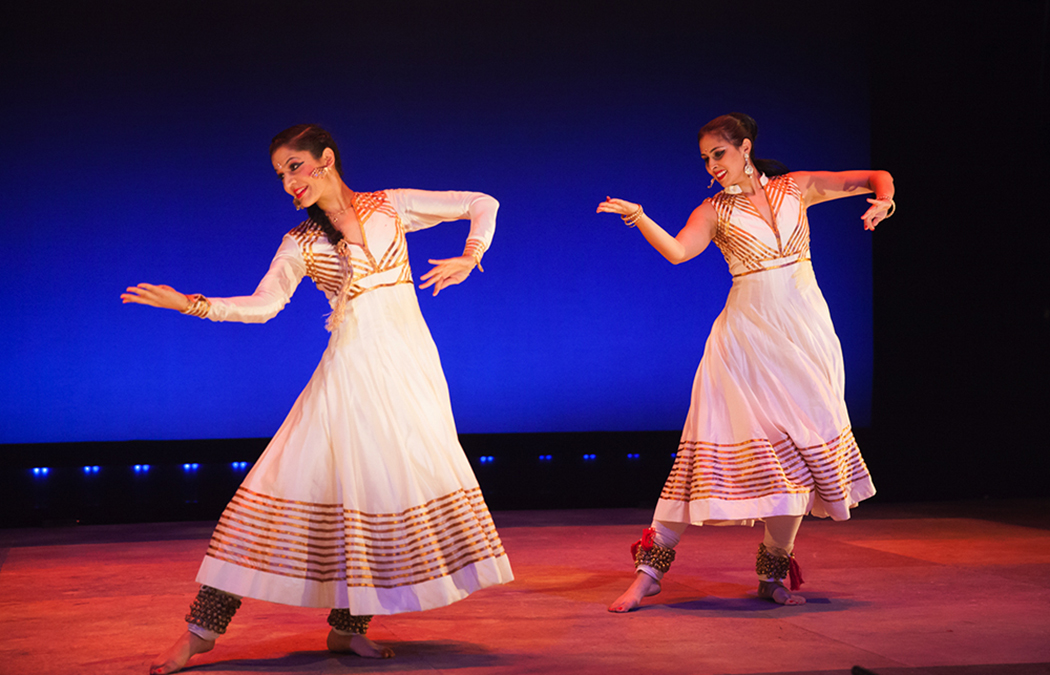 Leela Dance Collective, Michelle Dorrance, and Dormeshia to perform and offer a week of programs throughout the community

Winona, Minn. — The Page Series at Saint Mary’s University of Minnesota brings the Leela Dance Collective and world-renowned tap dancers Dormeshia and Michelle Dorrance to Winona Monday through Saturday, March 23-28, for a week of residency activities and a performance of their original dance and music production SPEAK.

Providing a live musical score by Allison Miller and Jayanta Banerjee are a trio of classical Indian musicians, led by sitarist Jayanta Banerjee, and a trio of American jazz musicians featuring pianist Caili O’Doherty. They are joined by Dan Kurfirst on piano, Keala Kaumeheiwa on bass, Debasish Sarkar on vocals, and Satyaprakash Mishra on tabla.

Kathak comes from the word “katha” which means story. The kathakas were storytellers that travelled from village to village in ancient India telling the stories of the great Hindu gods and goddesses. While the depiction of Hindu iconography remains visible in modern day kathak, the tradition of telling epic tales through kathak has been left behind by most contemporary practitioners of the art form in favor of more contemporary, abstract, or accessible explorations.

Tap is an indigenous American dance genre that evolved over a period of some 300 years. Initially developing out of West African musical and step-dance traditions — along with influences from other rhythmic forms such as Irish step dance — tap emerged in the southern United States in the 1700s.

The inspiration for SPEAK comes from the late kathak master Pandit Chitresh Das’ work with tap dancer Jason Samuels through their collaboration, “India Jazz Suites.” After Das’ death in 2015, the Leela Dance Collective was formed to continue his legacy.

Beginning Monday, March 23, members of the SPEAK cast will be in Winona to offer workshops, artist talks, and events designed to share the history and background of their work. All are invited to participate in free events throughout the week, including:

Company members will also participate in the Driftless Dance Festival on Saturday, March 28:

In addition, the artists will work with groups from Home and Community Options and Riverway Learning Community during their week in Winona. Area school groups are also invited to attend a school matinee performance of SPEAK on Friday, March 27, at 12:30 p.m. at Saint Mary’s.

Full activity descriptions and registration information is available at pagetheatre.org.

SPEAK will be performed Friday, March 27 at 7:30 p.m. in the Page Theatre. Tickets to SPEAK are $30 for adults, $27 for students and seniors, and $24 for youth, and may be purchased online at pagetheatre.org or by calling the Performance Center box office at 507-457-1715 (noon to 6 p.m., weekdays). Performance tickets are also available at a reduced rate when ordered as part of a Driftless Dance Festival pass.

To view the SPEAK trailer:  https://bit.ly/34knqpZ

Rachna Nivas is a charismatic performer, mentor, and powerful leader amongst today’s generation of Indian classical artists, bringing a contemporary voice to kathak. Deemed “revelatory” by the San Francisco Chronicle, she has an extensive performance career to great acclaim across the U.S. and India. She is a senior disciple of the late legendary master, Pandit Chitresh Das, and the former director of the Chhandam School of Kathak, one of the largest classical Indian dance institutions in the world. www.rachnanivas.com

Rina Mehta, founder and artistic director of The Leela Institute, is one of the most powerful Kathak artists of her generation. She is a senior disciple of the late Pandit Chitresh Das and has performed to great acclaim across the United States and India, both as a soloist and principal dancer with the Chitresh Das Dance Company. She received a Fulbright Award for Dance, and is a pioneer and strong leader amongst her generation, taking Kathak forward and carving a place for the ancient art form in modern times.  www.rinamehtakathak.com

Dormeshia Sumbry-Edwards has been a part of almost every major tap movie or show that has appeared in the history of tap dance since the 80s, including the Tony-winning Bring in Da Noise, Bring in Da Funk. Accolades include an Astaire Award for Best Performance, the Bessie Award, and the Hoofer Award. She is founder of Harlem Tap Studio and performs extensively at shows and festivals around the world. Dormeshia was also Michael Jackson’s private tap instructor for 11 years. She is revered as one of the most dynamic performers in the industry today. www.divinerhythmproductions.com/DormeshiaSumbryEdwards.html

The Leela Dance Collective was founded in 2016 by Rina Mehta, Rachna Nivas and Seibi Lee, senior disciples of legendary kathak master Pandit Chitresh Das, along with leading kathak performers Sarah Morelli and Shefali Jain. It is the only one of its kind Indian-American dance company that brings together leading kathak artists from around the world representing a multitude of voices to articulate a clairvoyant vision for kathak. The collective is distinguished by an artistic practice that centers around collaboration and collective creativity and a body of work that is at once grounded in tradition and boldly innovative. In its two-year history, the collective has already begun to make an indelible mark on the field of kathak and world dance with its rigorous technique, dynamic choreography, fashion-forward costuming, and sophisticated musical scores.

The collective has garnered critical acclaim across the United States and internationally for its groundbreaking productions from SPEAK, a collaboration that brings together leading female artists in kathak and tap, to Son of the Wind, a traditional dance ballad based on India’s epic, the Ramayana. With home season performances in San Francisco and Los Angeles along with national and international touring, the collective performs for more than 10,000 people annually. Past highlights include appearances at The Broad Stage, the Green Music Center and Yerba Buena Center for the Arts. The collective’s productions and performances have been supported by the National Endowment for the Arts, the California Arts Council, the Zellerbach Family Fund, the Esper Petersen Foundation and New Music USA. theleelainstitute.org.

About the Page Series

Now in its 33rd season, the Page Series connects professional performing artists from around the globe with thousands of Winonans each year. With events at the Joseph Page Theatre on the Winona Campus of Saint Mary’s University of Minnesota, as well as at locations across the Winona community, the Page Series offers dance, music, and theatre performances, workshops, classes, and more that inspire, uplift, educate, and invite community members to discover the relevance of the arts in their daily lives. www.pagetheatre.org

This activity is made possible by the voters of Minnesota through a grant from the Minnesota State Arts Board, thanks to a legislative appropriation from the arts and cultural heritage fund.

Driftless Dance Festival activities are supported, in part, by an award from the National Endowment for the Arts.

Page Series community programs are made possible in part by a grant from the Xcel Energy Foundation.