Giving a voice to transgender clients 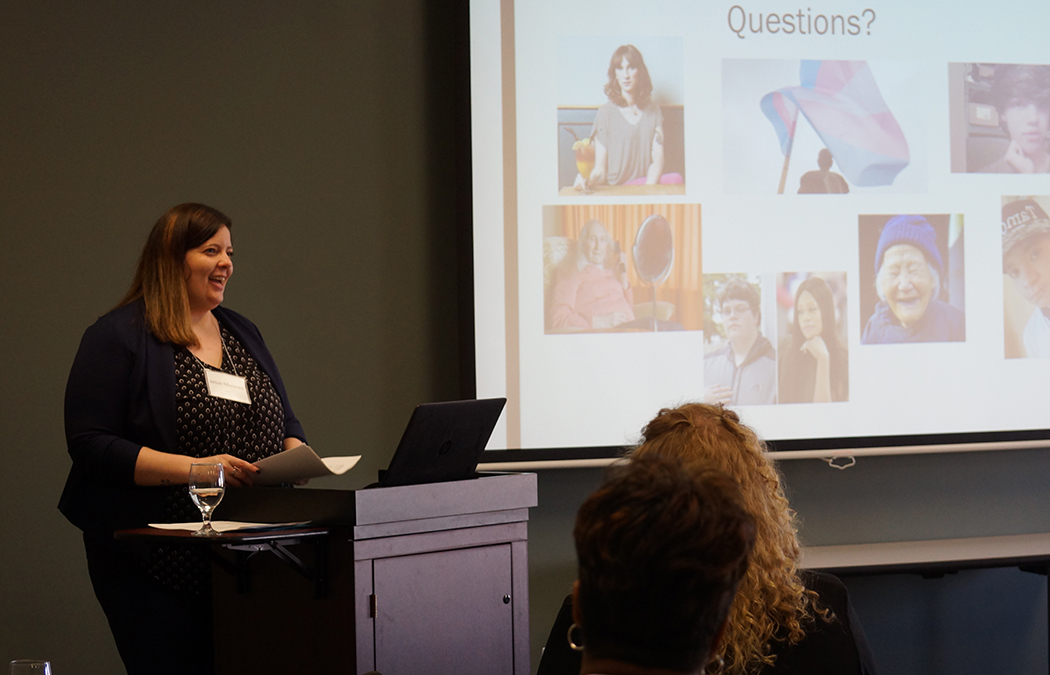 One of the first things Jesse Moonen M’16, D’19 (she/her) shares with someone she’s first meeting is her preferred pronouns. To her, it’s important to give people a voice, especially the marginalized.

In her work as a post-doctoral fellow, the marginalized are often transgender clients, which is why she decided to focus her dissertation on the subject.

“It’s an ongoing change, but trans people have always been here,” she said. “It’s not a new phenomenon; people who are gender diverse are just getting the limelight right now.”

Moonen has spent the past year and a half at University of Wisconsin Whitewater, first completing her clinical doctoral internship and then staying on for post-doctoral work. As a post-doctoral fellow, she’s completing supervised clinical work so she can later apply to become a licensed psychologist.

Day-to-day, Moonen works with college-age students. She typically sees students for individual sessions once every two to three weeks and also does outreach work on campus, educating students and faculty about mental health-related issues, stress, health care, and more.

“Students at the university have often been through a lot prior to even coming to college, so there are a number of clients who struggle with suicidal thoughts quite often. That involves a lot of risk assessments and hospitalizations,” explained Moonen. “I’m also seeing a lot of the queer and trans students and working with them on a variety of concerns. It’s rural Wisconsin, so it is a different type of setting with fewer resources.”

When deciding on a topic for her dissertation, she wanted to do research that would be impactful, give people a voice, and help clinicians in the area or who work with this population.

“At the time, clients were coming in with a lot of emotional stuff happening surrounding the election — a ton of fear, a ton of safety concerns, and a lot of trauma responses and increased mental health symptoms occurring around the campaign and the election,” she said.

Given her profession, she was interested in learning more about how these issues affected clients and what clinicians could do to better serve them. She was hearing a lot of clients, both trans and cisgender, talk about the political climate in their sessions and started gathering anecdotal evidence about how it was impacting them.

“Because gender is not something everybody understands, I talked extensively about it in my dissertation, describing what it means and why language is so important,” said Moonen. “Gender is our psychological sense of self. It is about what society says is appropriate for boys and girls, and men and women with regard to roles, appearance, behaviors, and activities. All of these aspects of gender impact how we feel about ourselves, how we behave, and how we are with others. It is different than sex and sexual orientation.”

She was interested to learn that clinicians were having to manage their own feelings surrounding the political landscape, particularly when those feelings contradicted those of their clients. With discussions about politics coming up in sessions, it was even more important for clinicians to navigate conversations through a professional lens, instead of an activist role, and really be present with the client in what was going on for them surrounding the election and campaign.

But what surprised her most was how aware clinicians already were of intersectionality, which she described as “the understanding that different privileges come with different identities and recognizing that all identities are there, are important, and are worth talking about — that includes age, gender, religion, socioeconomic status, and more.” Moonen was encouraged to discover clinicians were recognizing and acknowledging all the different identities that people hold and how the identities work together or can be conflicting.

“This struck me because I didn’t know it was going to be so apparent in their work,” said Moonen. “Seeing how all of those play together and how much of that comes up in this work is pretty incredible.”

As we enter another election season, Moonen is paying close attention to how these themes might play out again.

“I see my clients being proactive on a local and state level right now, but I do anticipate more conversation occurring as the presidential election nears,” said Moonen. “I’m not sure the same reactions will happen, because we’ve been living in this political landscape for four years now, but it will be interesting to see if and how things change for clients and mental health providers throughout this next election and presidential term.”

Moonen presented her research at Saint Mary’s annual Doctoral Research Symposium in March 2019. She was one of the first Psy.D. students to ever present at the symposium as it had historically featured Ed.D. students. This year’s symposium will take place Saturday, March 7.

“After my presentation, someone came up and thanked me for my work because someone in their family just came out as transgender. They were appreciative someone was paying attention to transgender health,” Moonen said. “I was grateful I was able to reach a broader audience that I wouldn’t have normally had access to.”

Moonen doesn’t know if more research is in her future, but wants to continue providing therapy for college students. She said she enjoys working on a college campus and recently developed a website and brochure about transgender health.

She hopes her research will reach other mental, physical, and medical health providers so they, too, can better understand gender and how to better provide gender affirmative care.

“We don’t have to know everything; that’s impossible. But to be affirming to a person who may be struggling is incredibly beneficial,” said Moonen. “I’m hoping that the research will also continue to give a voice to people who don’t often have one.”