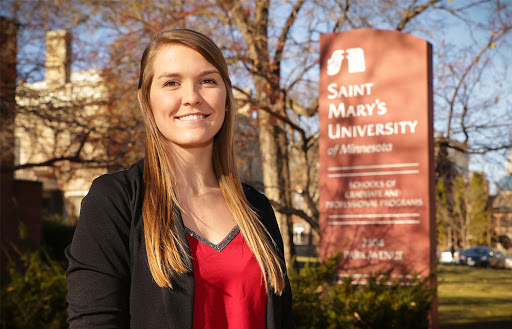 For years, depression has been associated with cognitive difficulties. A Saint Mary’s doctoral student is the lead author on a study recently published in the Archives of Clinical Neuropsychology, which provides a new perspective.

“We don’t want to necessarily attribute depression as the cause of any kind of cognitive decline. It is very possible it’s playing a role, but we shouldn’t blame depression entirely,” said Blair Honsey M’17, who is a student in the Doctorate in Psychology in Counseling Psychology program at Saint Mary’s.

The paper examined the effect depression had on neuropsychological test performances conducted with subjects with early-stage Parkinson’s disease. 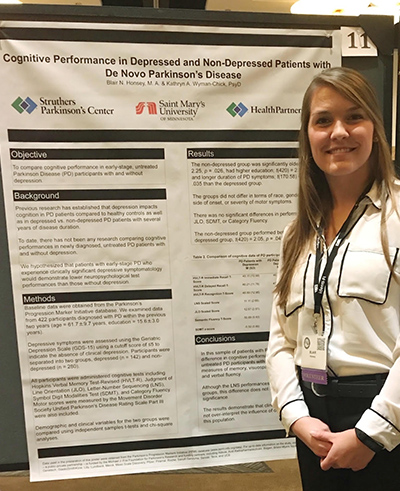 Blair Honsey M’17, poses next to the poster that she presented at the annual meeting of the National Academy of Neuropsychology in November in San Diego.

Honsey and the research team analyzed data from 422 participants who took part in the Parkinson’s Progression Marker Initiative (PPMI) using the Geriatric Depression Scale, known more commonly as the GDS-15, which is a set of 15 questions to assess the mental health of senior citizens based on a points system. The researchers used the scale to create two categories within the sample of patients with Parkinson’s disease: depressed (142 participants) and non-depressed (280 participants). Honsey and the study’s corresponding author, Kate Wyman, Psy.D., then ran a comparison of the cognitive data set of the two groups.

The only significant difference in cognitive function appeared when participants were tasked with a working memory test of remembering and reorganizing long sequences of numbers and letters. When looking at the entire data set, the findings suggest depression may play less of a causative role on cognitive loss, said Honsey, who presented a poster of her findings at the annual meeting of the National Academy of Neuropsychology in November in San Diego.

“It’s really common in neuropsychology for anyone who has depression or any kind of mental health issues to attribute some of their current decline to those mental health symptoms,” Honsey said, adding: “We do know that depression and anxiety definitely do have an effect on our cognition. However, our research is saying that we shouldn’t give those attributes a lot of credit, and to be aware when considering scores — and particularly early-stage Parkinson’s disease — that signs of depression don’t necessarily account for any kind of decline.” 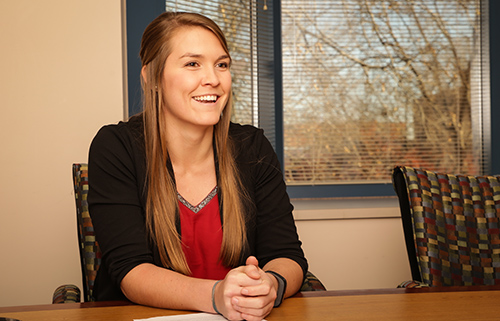 Blair Honsey M’17, is currently working on her third practicum as a doctoral student specializing in neuropsychology at Saint Mary’s.

The fact that the test results were not significantly different between the two groups of study participants surprised Honsey and her associates. Furthermore, when implementing the GDS-15 to create the two groups, it was a bit of a shock to see that the average score of the depressed group was a six; the non-depressed group, a four. A score of five or higher suggests depression.

“The non-depressed group was right up on the cusp of technically almost meeting that cutoff, which led us to think there are likely still some depressive symptoms in that group,” Honsey said. “So maybe the differences between the two groups weren’t different enough to determine a true effect in all of these different domains.”

‘This is going to be a sprint’

Honsey has been working with Wyman at HealthPartners Neuroscience Center in St. Paul since early spring as part of her third practicum in the neuropsychology field. The two first met through a mutual contact at Hennepin County Medical Center, where Honsey did her second practicum — and fell in love with the field of neuropsychology in general. 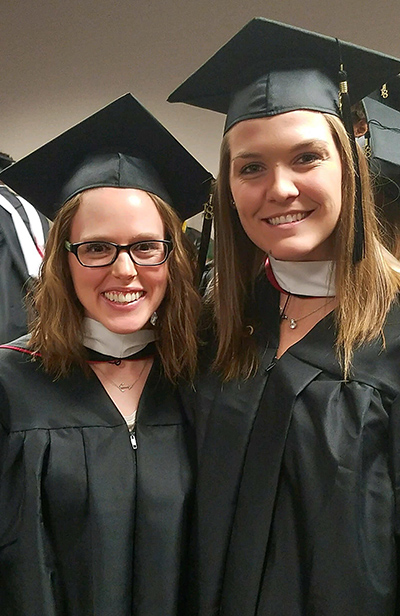 Blair Honsey M’17, with a fellow classmate in the psychology program, Kendra Van Rossum M’17, at the commencement ceremony for the Master of Arts in Counseling and Psychological Services in 2017. The two are currently pursuing doctoral degrees from Saint Mary’s.

“I think it’s really interesting to watch and see so many different people approach the same task so differently,” Honsey said. “It’s fascinating to see how our brains function so differently, even when we’re given the exact same tools or questions or things to work with.”

As soon as Honsey found out about all the previous work that Wyman had done in the area of Parkinson’s disease — and her mentor’s familiarity and accessibility to the PPMI data set — she was determined to not only get a paper published but also present at the national conference in San Diego.

“She just really struck me as someone who was eager to learn,” Wyman said. “I told her, ‘This is going to be a sprint. If you if you want to accomplish this, I think we can do it, but it’s going to be a challenge.’”

Honsey was able to submit an abstract, conduct the research, get the paper published, and present a poster at the conference all in the span of six months.

“It’s pretty unusual for it to go that smoothly,” Wyman said.

As Honsey’s academic path has indicated, though, she has no issues with getting tasks done quickly without sacrificing quality.

The Stewartville, Minn., native earned a double major in psychology and criminology from the University of Minnesota in two years after completing all of her general education courses through a college credit program at her high school affiliated with Minnesota State University, Mankato.

Honsey initially planned only to pursue a Master of Arts in Counseling and Psychological Services at Saint Mary’s in 2015, but was then sold on earning a doctorate to have “all doors open,” in her words, when she embarked on her career after her time on the Twin Cities Campus.

“I didn’t want to enter the field with a master’s degree and then find out that I’m really passionate about something else within the field that later requires a doctorate,” she said. 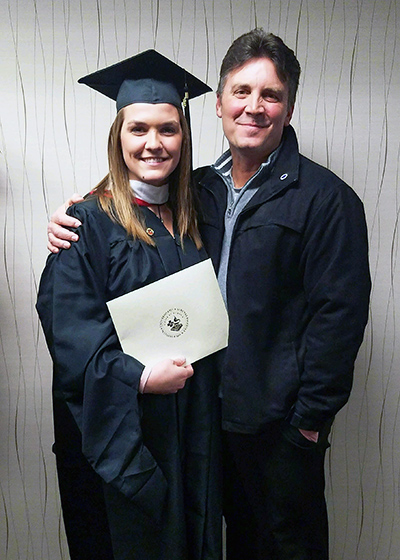 Blair Honsey M’16, and her father, David, at the 2017 winter commencement ceremony.

From the beginning of her time at Saint Mary’s, she has valued the veracity and the accessibility her professors have provided. She recalled one professor saying at the start that if the students only wanted to do therapy, the doctorate degree was not a requirement.

“I really just appreciated the honesty of looking out for us,” Honsey said. “A lot of people in my program and my cohort did just want to do therapy, but they decided to be a part of this program so they can get that further education and be a better therapist.”

Starting out on a path

Honey’s first practicum took place at the Federal Medical Center in Rochester, where she worked with inmates. Her work there inspired her dissertation, which examines the results from a survey she conducted of approximately 580 Minnesotans over the age of 18 who answered questions to assess their attitudes of support for the reentry of criminal offenders.

core professor in the program and Honsey’s faculty adviser. “Her appreciation of research as relevant for clinical work is the perspective we have been promoting in professional psychology for a long time, so to see Blair exemplify this at such an early stage of her professional development is inspiring for everyone.”

In addition to helping Wyman interview patients and conduct tests similar to those done as part of the PPMI at HealthPartners, Honsey also spends half of the week working as a senior forensic psychometrist at the Hennepin County Government Center in downtown Minneapolis, where she conducts psychological tests on people who are about to stand trial. She is in the process of applying for a year-long clinical neuropsychology training internship at a hospital or Veterans Administration facility, before finishing her degree in fall 2021.