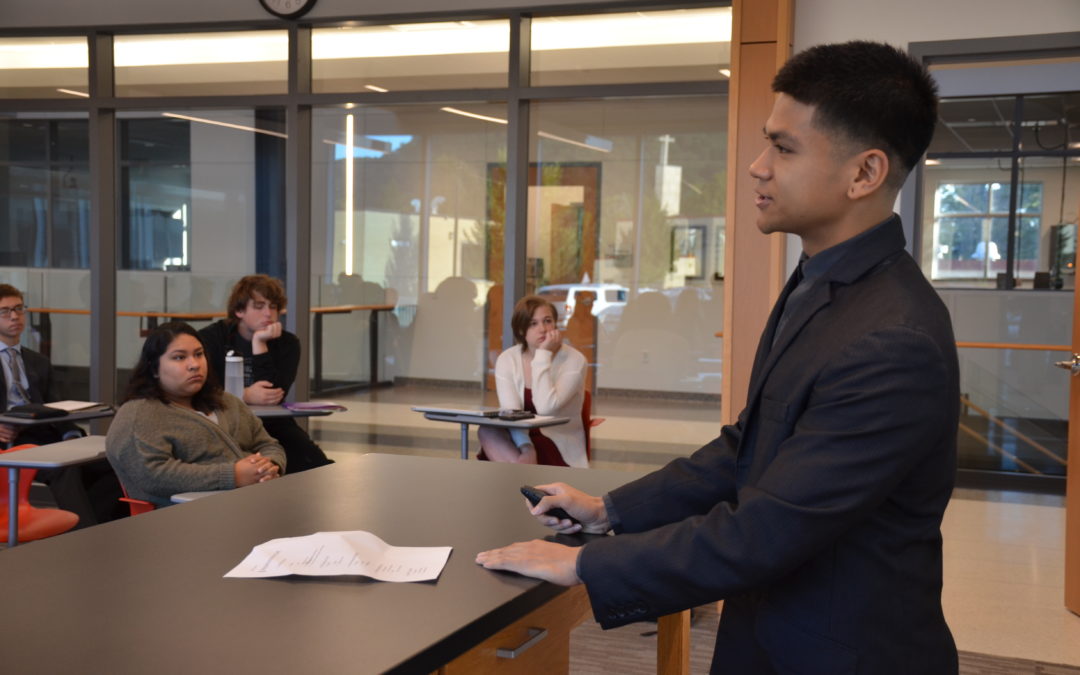 Brian Tran has dreams of working on Wall Street. Before he could think about managing accounts at a large private investment firm, however, the first-year student knew where he wanted his time and attention to go two mornings out of the week: “Before you can invest in your future, you have to first invest in yourself.”

That belief helped drive him to enroll in a one-credit pilot course called “Career Explorations” on the Winona Campus, which ran for the first half of the fall semester.

Taking place at 8:10 a.m. Tuesday and Thursday mornings at the Science and Learning Center, the class researched prospective career paths in a group setting. They also took personality/strength assessments (through instruments such as Myers Briggs and StrengthsFinder), developed résumés and cover letters, worked on 30-second introductions, and conducted informational interviews. 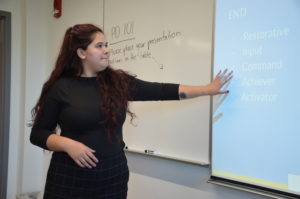 First-year student Vanessa Bartlett points to the screen during her final presentation of the Carer Explorations course.

In addition, members of the human resources team from Winona-based manufacturing firm Fastenal distributed career readiness surveys to the students, who then filled them out and later received individual assessments.

The curriculum also included the practice of maintaining eye contact and conducting a proper handshake, skills that instructor Michael Hagarty said “are very Lasallian because the Lasallian principle is to make people feel successful in the world that surrounds them.”

Tran, who is from Blaine, Minn., had first started building résumés and cover letters through a career preparation course in high school. What made the Saint Mary’s course stand out from that experience, though, was doing informational interviews with the assistance of correlating information, he said.

“I never really explored that type of interview, nor did I really even know much about it,” Tran said. “I feel that the material provided had a ton of informational questions we could use.”

Being a double major in international business and finance, Tran set up an interview over the phone through a friend of a friend who works in the financial world in New York. Tran is currently trying to land a summer internship in his chosen field, especially one in Manhattan.

Tran entered the class as one of 22 students — most of whom are first-year students or sophomores — knowing that he wanted to go into business and finance. What he discovered in the course, though, was an interest in researching educational paths such as high school teachers, college professors, and fitness trainers.

Through the group counseling session dynamic, Tran said that learning about the possible career paths of his peers helped clarify his own.

“I feel like the class has really helped me with being able to understand and empathize with others’ thoughts and opinions and be more open-minded … because there are so many paths and so many opportunities out there that you wouldn’t even think of at all on your own,” he said. 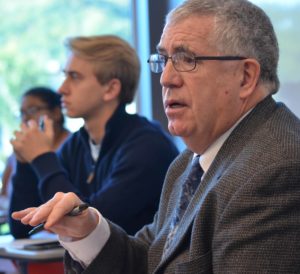 Mike Hagarty, director of Career Services, listens to final presentations of the inaugural Career Explorations course on Oct. 8. To his left is junior Kris Shepard, who co-taught the class with Hagarty.

Mike Hagarty serves as the director of Career Services at Saint Mary’s. For several years, he has run voluntary workshops geared around the same material, but “repeat customers” were hard to find. Allowing students to receive one credit created an opportunity for students to be more motivated, he said.

“I think it’s been very helpful for them to know that they’re not alone, but also that there are people who they can go to who will understand where they are in their journey,” said Hagarty. He also made note of the instruction provided by one of his interns, Kris Shepard, a junior English minor who co-taught the course. Shepard is interested in possibly enrolling in the M.A. in Teaching program upon graduating.

Hagarty was also overwhelmed by the dedication of the students who made their way to the class each week at a time that is thought of as being too early for many of their peers.

“The fact that there were that many people who were willing to trade an extra hour of sleep for what they thought would be a benefit of this class, that’s amazing,” he said. “It’s been exciting to see the various places that the students have come to this class from, and how they’ve been able to see common threads with each other.” 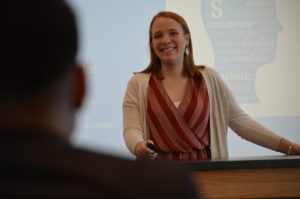 First-year student Mary Moritz addresses the audience during her final presentation of the Carer Explorations course.

Mary Moritz, a first-year student from Saint Michael, Minn., said that she had never created a résumé or a cover letter before taking part in the course. Moritz plans on declaring her major as elementary education, but during the course she also explored the possibility of being a social worker, occupational therapist, or psychologist.

Although she had been thinking about the first three professions since high school, the fourth option came as a recommendation from Hagarty after looking over her career and personality assessment data. She recommends future incoming students enroll, as well.

“I would recommend, even if you have your major figured out, to take the class, because you might find something that you want to do more,” Moritz said.

“I think that it also confirmed things that I already knew about myself, Like, ‘Yep, this seems right. This is what I want to do’… I know that I want to work with people, even though I don’t know my major yet.”

The hope, Hagarty said, is that the course will become part of the regular offerings for undergraduate students next year. In the meantime, he will be teaching a similar one geared toward juniors and seniors in the spring called “Search Strategies,” which will help interview for, negotiate, and receive a job offer before they graduate.