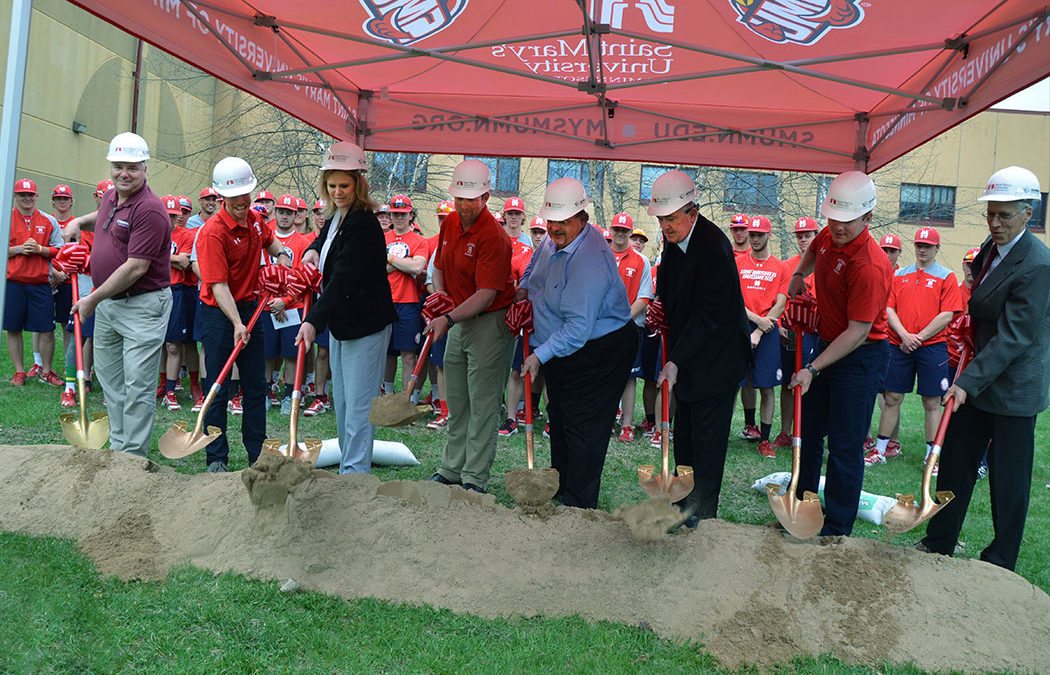 It was a game-changing move.

Saint Mary’s University broke ground May 1 on a new $704,000 baseball clubhouse, and excitement was in full swing.

Assistant athletic director and Cardinal head baseball coach Nick Winecke ’07 told the audience, “Having a facility that sets us apart from the competition will help us with recruitment, and it will also help us ultimately on the playing field. Our athletes will be able to use this facility year-round to study in, to learn from each other in, and to further bond as a team off the field.”

The project was made possible through the generosity of a lead gift from Marc Weisenburger ’75, and more than 50 other young alumni have stepped up to bat to join Weisenburger in this dream by sponsoring lockers at $2,000 or more.

Winecke said that the clubhouse, which will be referred to as Pudge’s Place — in recognition of Weisenburger’s nickname during his playing days — is proof of what a university can accomplish when groups of thankful and generous benefactors give back to their alma mater in thanks for the experiences they received as athletes.

“It’s very affirming and heartwarming to see our alumni athletes paying it forward to future Cardinals,” Winecke said. “I believe the bonds that are formed here last throughout a lifetime. There’s also a sense that our alumni athletes shared an experience they’d like to see future athletes also experience.”

The 2,500-square-foot facility will include:

Weisenburger said he was inspired by the generosity shown by Saint Mary’s alumni and friends while building the Science and Learning Center.

“I wondered what people could accomplish when they could join together for a cause they believe in … something near and dear to my heart, the baseball program at Saint Mary’s and (legendary coach) Max Molock,” he said.

“Max Molock trained athletes to compete in baseball and we had a modicum of success, but most importantly he trained us how to be better as people and leaders,” he added.

Winecke said that when Weisenburger, who has supported the baseball program at Saint Mary’s for 10 years, started talking about his dreams for the clubhouse, he knew he wanted to create something that would help the Cardinal baseball team develop as players, more importantly develop strong leaders.

“You can’t expect to be great at something without putting in the work,
Weisenburger said. “That’s how I have attempted to live my life and that’s what I’ve learned from game of baseball and from Max. He coached for 42 seasons before retiring in 1983. And I believe this same life mentoring approach and coaching style is has been adapted by Nick Winecke more than 30 years later.

“It is time for our baseball facilities to match the amazing things happening in Saint Mary’s athletics,” Weisenburger said. “I felt that my fellow alumni and others would join in helping Saint Mary’s differentiate its program from the competition.”

Brother William told attendees, “Today is about a space, but it’s much more about what’s going to be possible in that space. It’s not just about young men wanting to play ball but knowing what it means to belong to a team and to each other. Team, remember all the people who believe in you. And in a few years, be as willing to dream as Marc is. Reach out across the generations to help them achieve their dreams. It seems to me that is the dream of a Lasallian institution. That’s the dream of Saint Mary’s. It’s not about me; it’s about us.”

See more photos from the day.