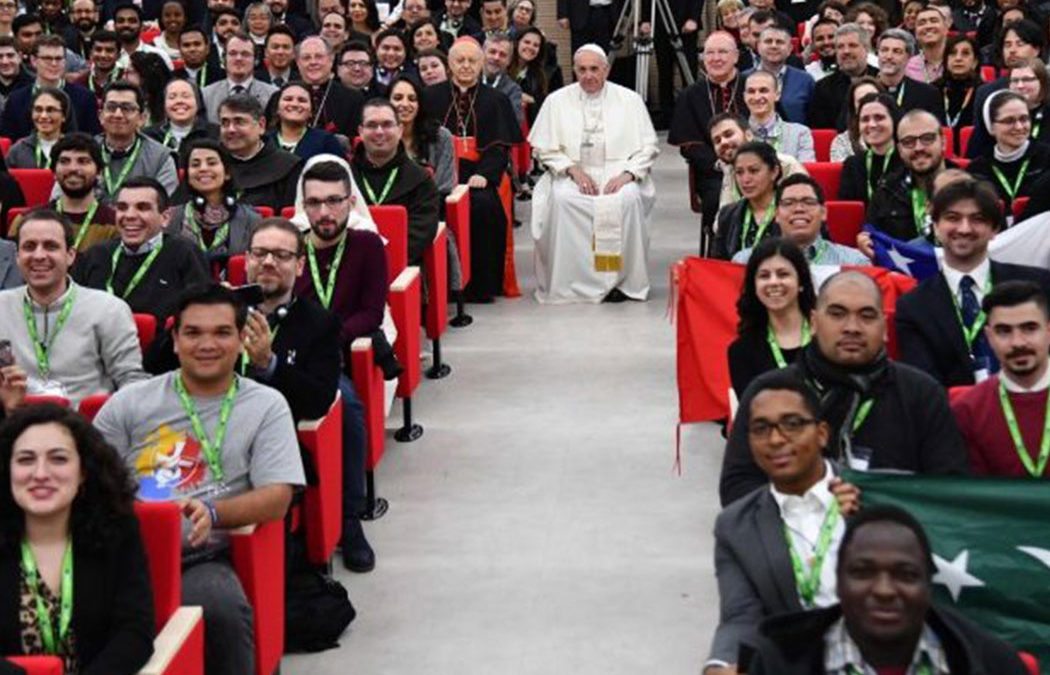 Sister Marie Faustina, RSM, who is currently majoring in elementary education K-6 at Saint Mary’s University, was one of only eight individuals selected to attend a Pre-Synod gathering March 19-24 in Rome with Pope Francis. Sister Marie was one of 300 young people from throughout the world who shared their voices with Pope Francis. She recounts this amazing experience below.

With 300 other young people — including people of other faiths — I had the honor of being a representative at the Pre-Synodal Meeting in Rome from March 19-24. The purpose of the meeting was to produce a document that would assist Pope Francis and his brother bishops when they convene in October for the Synod on Young People, the Faith and Vocational Discernment. In producing the document, the representatives were encouraged to “express their view on the state of things, their ideas, their feelings and their recommendations.”

During the first full day, Pope Francis met with us for over three and half hours. During our time together, with the assistance of simultaneous translation, he spoke about the importance of listening to one another. He suggested that we take as our models Samuel and David from the Old Testament as both were young and eager to do the Lord’s Will. He also encouraged us to be courageous. He said that taking risks keeps us young, and if we do not take them we retire at age 20. Yet, in being courageous we also need prudence. After he shared his reflections, he heard testimonies and questions from around the world. His generosity and attentiveness were a true inspiration.

With his departure, our task began. Everyone was divided into a small language group consisting of about 15 people. As I recall, there were four Italian groups, four Spanish groups, four French groups, nine English groups, and four “virtual” groups for the young people participating online. In my small group I had people from: Japan, the Philippines, Zimbabwe, Tanzania, Armenia, Romania, Australia, Pakistan, Canada, Indonesia, Ukraine, India, and Germany. The first day was devoted to examining the challenges and opportunities of young people in today’s world. We were given five questions to guide our discussion.

Each small group had to compose one document which would contribute to the final document as a synthesis of all the small group discussions.  The discussions were incredibly enlightening and a testament to dialogue. The second part of the document was related to faith, vocational discernment, and accompaniment; and third part was aimed at the Church’s formative and pastoral activity. Everyone contributed and at times there were true connections. Other times our personal experiences and beliefs made it challenging to see connecting factors. Yet even among our differences the representatives tried their best to serve the Church during these meetings.

We met with our small groups throughout the day for the first half of the week. All participants would break for lunch and dinner. The meal times were extremely memorable. I had never before sat down at a dinner table with such diverse multicultural backgrounds! I found myself sitting at a dinner table with people from Switzerland, China, Italy, India, Poland, Peru, and more. It amazed me how many people spoke English. It was true experience of a worldview encounter.

Midway through the week, a writing committee composed of 14 young people began working to synthesize our small group documents. With simultaneous translation, we then met an additional three times as a large group. Suggestions and corrections were made before the committee composed the final document. The time ended together with a Mass celebrated by Pope Francis in Saint Peter’s square in which he received the final document.

Throughout the week I was able to find seven other people from the United States. Of the eight of us, three were from a religious community, including Brother Javier Hansen, FSC. I saw it as a wonderful manifestation of God’s Providence! I look forward to a final document written by Pope Francis after the Synod in October.

Sister Marie Faustina with other representatives from the United States. Photo courtesy of the District of San Francisco New Orleans.