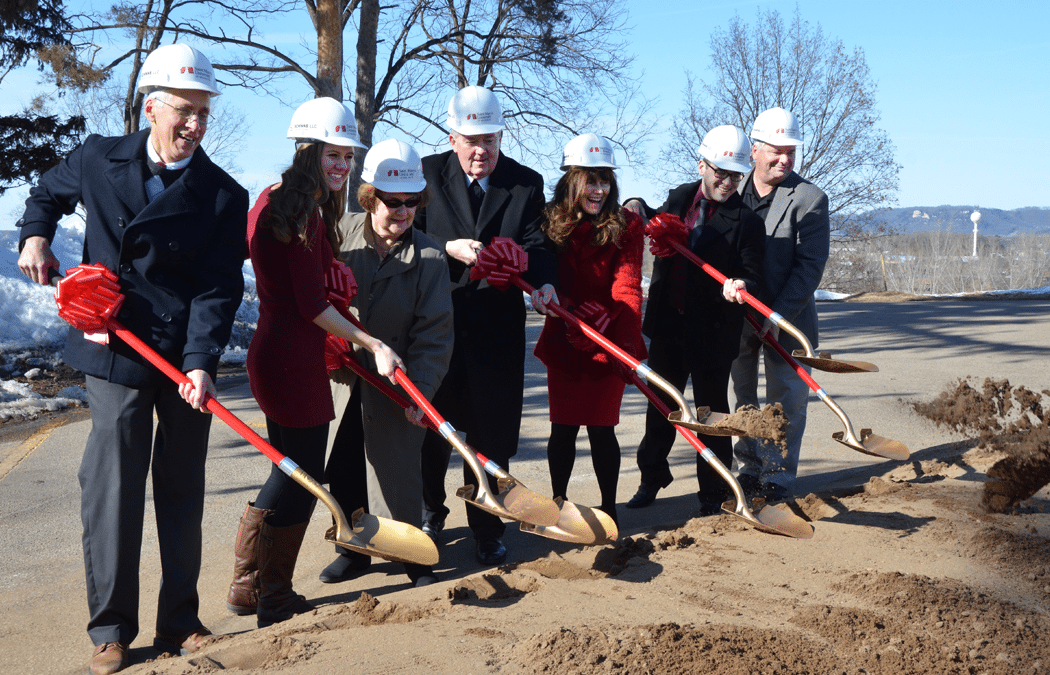 WINONA, Minn. — Although the wind blew mightily, it didn’t deter a crowd of about 150 from gathering to help Saint Mary’s University break ground March 13 on a new 112-bed, three-story residence hall for first-year students on the Winona Campus. Brother William Mann, president of the university, told the crowd it was truly a time for thanksgiving.

The $6.9 million residence hall is being entirely funded through philanthropic gifts. Two anonymous families chose to not only help Saint Mary’s create a vibrant living facility to attract new students, but also to honor outgoing president Brother William’s 10-year legacy at the university.

“Wonderful things are happening at Saint Mary’s, and I’ve been privileged to be a part of that,” Brother William said. “Those (benefactor) families are doing what they’re doing for our students,” he said. “If you want to put your hand in and hold my heart, do something for our students in my name. I am deeply touched and profoundly grateful.

“Leadership is relational,” he added. “I am blessed because so many of you have been my partners. As trustees, and friends, and benefactors, and faculty and staff, and students, we have held hands and minds and hearts. And what we have done these past 10 years is not only for us, it’s for tomorrow.”

Brother William announced this past fall that he will conclude his service in May of 2018. Audrey Kintzi, vice president for Development and Alumni Relations, highlighted a few of the ways Brother William has positioned the university well for its future.

“Under your leadership, our endowment has grown significantly (from $37 million to $64 million), tremendous progress is being made on the $57 million capital campaign (which is now around $55 million), and our online programming has seen much success (growing from just 47 graduate students to over 1,200),” she noted. “This spring the First Generation Scholars — who were our first Countdown to College students as eighth-graders — will graduate, bringing the dream you expressed at your inauguration in 2008 to reality.

“Visually, one only needs to look around to see what we’ve accomplished. During your tenure, we’ve constructed and acquired numerous buildings and made significant improvements on both main campuses, as well as in Rochester.

“And, spiritually, Saint Mary’s has never been more closely tied to its Lasallian heritage,” she added. “We most easily and clearly see the impact you have made, through the successes of our students — who have come to know you as their mentor and as someone who cares about their futures.”

Brother William Hall will be located on the northeast corner of campus, attached to the former Pines Hall — which was renamed Bishops Hall during a separate ceremony March 13. As is the intent of the benefactors, the new facility — expected to be completed in 2019 — will stand as a lasting tribute to Brother William’s tenure and accomplishments as president.

View photos from the day here.