Turning a passion for sports into a broadcasting career 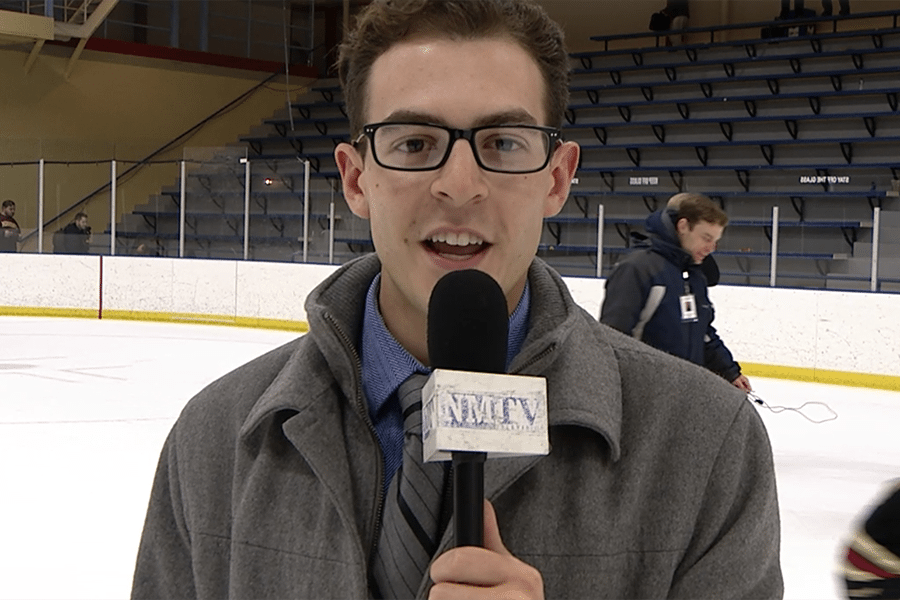 For Rick Palermo ’16, nothing beats the excitement of play-by-play sports action.

Although a recent graduate, Palermo has already broken into the competitive sports broadcasting and producing world — and he’s loving every action-packed minute of it. As a production assistant at Fox Sports North and a freelance broadcaster, Palermo is pushing toward his dream of one day broadcasting for a professional baseball team.

Palermo landed a job at Fox Sports North in Minneapolis, Minn., one year ago, and his main job is to edit and produce video. Whether it’s the Minnesota Twins, the Wild, or the Timberwolves, Palermo probably had his hand in the pre-game highlights. Although he isn’t in front of the camera at Fox Sports North yet, Palermo is keeping his skills sharp by broadcasting for two other stations.

“The thrill of performing is the coolest part,” he said. “You do all your homework, prepare for the game, look up stats, memorize names. And then you get one chance to perform it in front of a live audience.”

A natural speaker, Palermo says he still gets a little nervous in front of the camera. Although his role as production assistant at Fox Sports North is all behind the scenes, learning from the professionals is helping him sharpen his broadcasting skills.

“The most difficult part of starting in broadcasting is finding your voice and having the confidence,” Palermo explained. “You also have to be quick-witted and able to think on your feet.”

Palermo’s love for sports runs deep. True to his Chicago roots, Palermo grew up watching the Cubs and Blackhawks and is still a big fan. He got involved as the baseball team manager in high school, which set him up to go on to be the baseball manager at Saint Mary’s all four years.

Student managers don’t only keep the book and stats during games; Palermo attended every practice and game and even helped run drills. “It’s a big commitment,” he said. The challenging role helped him gain valuable experience.

Palermo started at Saint Mary’s as a business major but soon learned he wanted to explore other areas. After taking Intro to Mass Communications with Dean Beckman, associate professor and department chair, he switched to a public relations major.

In a field exploration class assignment, Palermo tried his hand at broadcasting. He started sportscasting with Saint Mary’s men’s and women’s basketball his sophomore year and soon discovered he had a passion for the career. Wanting to do more, he got involved with with HBC (Hiawatha Broadband Communications), the local TV station in Winona, doing play-by-play work. Palermo estimates he commentated more than 50 games by the end of his four years at Saint Mary’s, including volleyball and hockey too.

Palermo said Saint Mary’s gave him experience and helped him find opportunities. “At a smaller school like Saint Mary’s, you’re more connected with other students, teachers, and athletes,” said Palermo. “You have a lot of opportunities available to make your own and turn into whatever you want. You’re part of a community that works together and makes each other better.”

That community was strengthened in part by the connection Palermo was able to make with the De La Salle Christian Brothers. Before coming to Saint Mary’s, he attended St. Joseph High School, a Lasallian ministry, in Westchester, Ill.

“The Lasallian connection is great,” Palermo said. “It gave me another perspective on life and taught me how to be a good person.”