Graduate scores on the court and in class 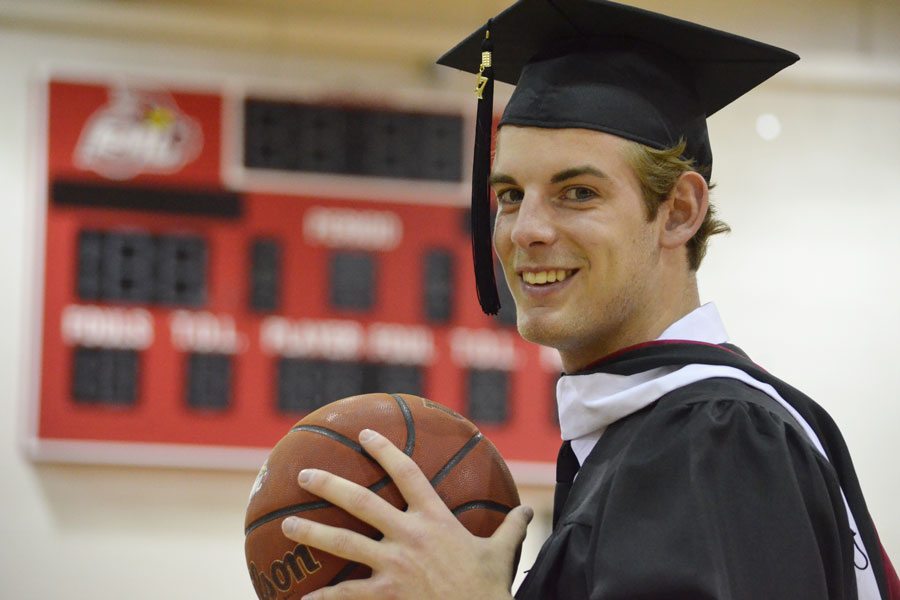 Wylie Ferron ’17 may not be dressed in his usual Cardinal red, but he will definitely have the home-court advantage when he dons a cap and gown and hits the gym floor Saturday for Saint Mary’s University’s Winona commencement ceremony.

As a three-year captain of the men’s basketball team, Ferron has engineered many successful basketball performances during his college athletic career; this fall he’ll pursue a graduate degree in civil engineering.

For four years, Ferron achieved high scores in basketball, closing out his senior year as the team’s scoring leader, averaging a career-best 14 points per game. A Math major and Chemistry minor, he also scored well in classes ranging from probability to abstract algebra.

But he admits the abstract, theory-based math classes stretched and challenged him.

“I’ve always wanted to get into engineering,” he said. “I’ve always loved working with numbers and problem solving. In math, once you learn about patterns, it becomes fun.”

In basketball, he said, he learned that his tendency to find the patterns could be both good–and bad. “Sometimes you have to go off script,” he said. “I learned as much from basketball as I have from math when it comes to the real world.”

The Waconia, Minn., native was recruited to Saint Mary’s to play basketball, but found he fell in love with the campus and the Winona area and knew he’d found the perfect fit. “I debated whether or not I would play basketball in college, but I’m really glad I did,” he said. “It kept me focused. We have a pretty close-knit team, even though we’re all from different backgrounds.”

He said juggling athletics and academics taught him about time management and kept him on task.

It also taught him leadership skills he believes will be valuable as he heads to Oregon State in Corvallis, Ore., to pursue a master’s degree in civil engineering. He looks forward to studying at a renowned engineering school with facilities dedicated for structural testing and geotechnical engineer. The school’s wave lab is internationally recognized and features the worlds’ largest tsunami wave basin.

This summer, he’ll complete an internship with Danny’s Construction in Shakopee, which completed much of the structural work for U.S. Bank Stadium.

The summer after his sophomore year, he worked with the City of Winona Engineering Department doing surveying. This experience helped solidify his career path. “It gave me a good idea of some of the operations and tasks of construction projects,” he said. “It also taught me about some of the language of the engineering world.”

Eventually, his goal is to lead construction teams as a project manager on large-scale developments like stadiums, bridges, and large buildings.

“I think one of the things that will benefit me the most in my career in management has been learning how to work together as a team,” he said.

Ferron said he and Coach Jamison Rusthoven worked together to change the culture of the men’s basketball team during his four years at Saint Mary’s. “Coach Rusthoven has been a good mentor, and I definitely give him credit for my growth as a leader,” Ferron said. “I’ve grown a lot in that area, and I want to keep learning.”

Ferron describes a good leader as someone “who knows the people you are working with and how to bring the best out of them. You have to know how to motivate and push them to reach their maximum potential and maintain a good balance between encouragement and holding people accountable. You also need to know your goals and outcomes, so you have a vision of where you’re going so you can direct everyone for the benefit of the team.”

Ferron said that as he crosses the stage Saturday, he knows he will miss a lot about Saint Mary’s. “I formed a lot of close relationships with the coaching staff, faculty and my friends,” he said. “That’s the thing about going to a smaller school, there are more opportunities to build those relationships. I’ll also miss basketball, but I feel like I put everything I had into it, and I got everything I wanted to out of it.”